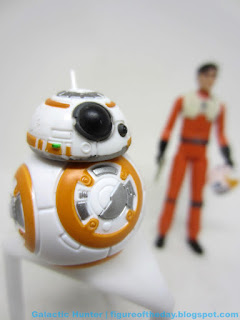 Bio: A hotshot X-wing pilot for the Resistance, Poe Dameron is a natural leader who keeps an eye on the crew of the Colossus. When Poe sets out on his own missions, he leaves behind BB-8, a rolling BB unit whose spherical shell is packed with useful tools and computer interface equipment, to work alongside Kaz and the rest of the crew. (Taken from the figure's packaging.)

Commentary: Infuriating.  Back in 2015 BB-8 in a set with Poe Dameron would have flown off the shelves at $15, but in 2019 the value proposition doesn't meet the hype.  That first BB-8 was packaged with two cool new alien figures for the same price, thus softening the blow of having to pay $15 for the breakout star of the new movie's trailer.  By now people are over BB-8 a bit, so the mere hint at the cybernetic marble being a toy isn't enough to make it an exciting purchase.  While improved, this is not an exciting purchase.

His companion Poe figure is a gem - the slim, redesigned pilot fits better in toy X-Wings than the movie ones!   This new animated BB-8 is cleaner and rounder, with better paint, but there's a smaller flat base that's a bit harder to find. The only thing that moves is the head, so really all the figure delivers is a clean, stylized design with orange and silver paint within the lines, clearly, on a white chassis.  It's very good - but if this set were $9.99, given how little is in it, you might still huff and puff about not getting enough toy for your money.  And this is $15.

Since the line is probably already over for good, I assume any of this is moot - fans in the future will probably want this set because it's a great example of Hasbro releasing a wonderful set of figures, regardless of price, that look good and behave better as toys than nearly anything they've done since the 1995 relaunch. No other line better captures the ease of play as Resistance, unfortunately you'll have to borrow all the vehicles from previous series as Hasbro has elected not to release any at this or probably any other time.  If you see it on clearance for $10, get this set.  If you want a really good Poe figure, get this set. If you have no other BB-8 toys, get this set.

The real question here is: did you enjoy the pizza?