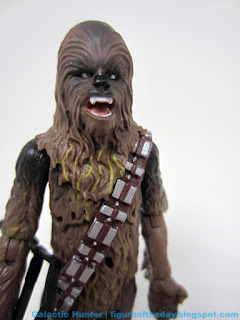 Bio: Chewbacca, known affectionately to his friends as Chewie, was a Wookiee warrior, smuggler, and resistance fighter who fought in the Clone Wars, the Galactic Civil War, and the conflict between the First Order and the Resistance.  (Stolen from Wookieepedia.  Packaging has no bio.) 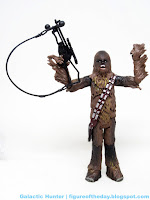 Commentary: This Chewbacca was kind of a strange one because the official photos don't necessarily match the product.   Shots of the toy against a yellow and black gradient background were of The Black Series Chewbacca - which has different decoration.  The carded and loose shots - typically, actual factory samples - show a completely different head sculpt and different paint from older releases.  This is all very strange, because this figure seems to be an all-new paint job with a head from about 4 years ago.  This is our future - reruns with paint that shows us Hasbro can and sometimes does not do better.

If you got Chewbacca from The Black Series [FOTD #2,165], this is basically that mold.  Key changes include better fur paint, the interior of the mouth is painted pink now, and less raccoony eye paint.   Chewie is darker overall, but it's still the 2004 Original Trilogy Collection  body.  Hasbro has seemingly decided they can't or won't ever try to do better, 15 years later.  It's much improved and doesn't have the weird light brown streaks that may imply possible accidents.  Chewie's claws, nails, and a lot of the fleshy parts of his hand and feet are also painted.  This is definitely the best deco we've seen on this mold. 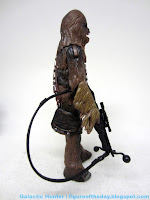 As packaging goes, this is the first time Hasbro gave us a The Vintage Collection Chewbacca on a packaged modeled after the original double-bordered Star Wars 1978-1979 packaging.  It's also the first "Vintage" package Chewbacca in this size since the 2004.  If you're a packaged fan or an opener his is probably an essential addition unless you're the kind of weirdo that has one or two Chewbacca figures and says "I'm good, thanks."  A black bowcaster, the best head paint job yet, and 23 points of articulation are all wonderful features.  And I'm sure Hasbro will make one with better hands in a few years so they can sell it to us for another 15 years.