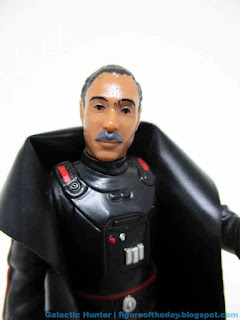 Bio: Gideon was a human male who served as an officer in the Imperial Security Bureau, a law enforcement and intelligence agency of the Galactic Empire. (Stolen from Wookieepedia. Packaging has no bio.) 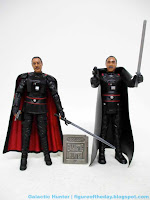 Commentary: If you're old - and I'm old - Moff Gideon makes for a curious design case. When I first heard The Mandalorian would get retro figures, I assumed they would take design cues from The Power of the Force, Ewoks, and Droids lines - that is to say, cloth capes. Kenner replaced the Jawa's vinyl cape with cloth before the end of the 1970s, and new figures after 1981 were all cloth all the time until the line's first demise. Seeing a figure like Moff Gideon - with a vinyl cape and a Bespin/Jedi/Snowspeeder Luke-style lightsaber, it's a weird trippy choice. Of course, it would make little sense to give him the telescoping lightsaber, because you would be unable to give it to Mando. And you will no doubt want to do that at some point. 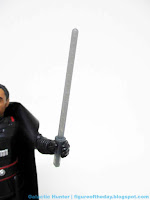 Seemingly a demake of the surprisingly good Moff Gideon (The Vintage Collection) [FOTD #2,773], you can see that it seemed they just took that design and rolled it back. (But not a lot.) The original Kenner Darth Vader was almost completely unpainted except for his chest panel buttons, whereas Gideon sports red stripes on his belt and sleeves too. He has grey and black paint on his face - the mustache is a nice touch - which is unusual, but not unheard-of. For example, some releases of Lando had both black and white paint on his face - but most humans had their facial details all painted in one color. I appreciate the extra pennies spent on paint, and while the silver buttons and belt buckle also look nice - are they too nice? Darth Vader's were usually a cruddy white paint, and that sounds truer to what was truly vintage/retro/what we had when Star Wars was still new. 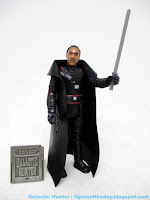 Sculpted detail is a little soft, which is odd because some of those old Kenner figures have incredibly sharp sculpting. It may not have the authentic detail of today, but there are some superbly crisp lines and ridges on those 1978-1985 releases. Hasbro's new "retro" guys are a bit duller, which gets the point across but isn't necessarily true to what was real. Maybe it's intentional. Maybe it isn't. At least Gideon can still stand, sit, and hold his gear. His head has a decent likeness too, even if the head does have a little paint slop. I don't like the paint slop. But whatever.

In addition to the removable cape, he also has a blaster and a Darksaber. The Darksaber is the 1980s-style Luke lightsaber, now cast in a barely-translucent grey plastic to simulate the weird dark blade you've seen on the streaming screen. This is exactly the kind of thing Kenner would have done in the 1980s - they use the same weapon design over and over, rarely (or barely) every changing it. They could have done an all-new design that's truer to the show, but phoning it in a bit is appropriate. Meanwhile, they gave Gideon an all-new blaster pistol. Good for them. I would have happily accepted them just throwing in whatever blaster they had handy, because Kenner was also fond of handing out "Bespin" blasters, Han's blaster, or a Stormtrooper blaster to dang near everybody. You could've got Jedi Luke's blaster here and you'd be fine with it. What I really wish is that we got a cloth cape like Lando Calrissian (General Pilot), but the Darth Vader-esque vinyl cape works well here. I still don't think it clicks with Mando, but Gideon and Greef Karga can rock a slab of vinyl like nobody else. 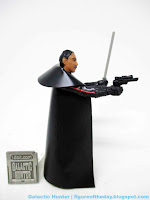 The good thing - or bad thing - about this kind of figure is it might cause some fans to revisit what they collect, and why. I've certainly become disillusioned with completism after decades thanks to things like carbonized figures, credit collection, gold figures, and holiday figures making me shrug once I open them... or skip them, as the case has been lately. (Yeah, you're not going to see reviews of everything here anymore. The repaint exclusives in the 6-inch line and gold figures broke me.) The Kenner-style figures have proven to be lots of fun for me - I assume younger fans will love displaying them on their cards, while I ran back to pick up the AST-5, CAP-2, INT-4, Imperial Sniper, and other Mini-Rigs and had myself a fun little time playing with all of these guys. Sure, the foot pegs don't quite fit, but at least most vehicles don't require them. If Hasbro expanded its Kenner offering, I could see reconsidering what I buy going forward. I opened up the Best Buy Black Series Qui-Gon Jinn the other day (review a-coming) and while it is better than the last release, it brings me absolutely no joy. Retro Fake Kenner Gideon is a delight - he can hang out with Uncle Gundy and Jann Tosh and everybody, it'll be a good time. Just you see. And it's OK if you don't agree. You can buy 6-inch or 3 3/4-inch super-articulated Gideons if you prefer. I like this one best.