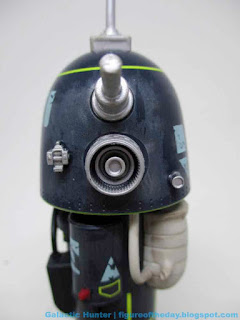 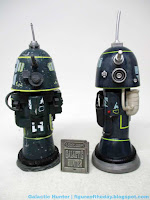 Commentary: This is a new sculpt! Disney's R1-J1 looks a lot like R1-G4 from Hasbro, which was a big droid the Jawas had in the original Star Wars. They don't share any parts, but have similar coloring and silhouettes. You could put this in your Sandcrawler and it's good enough, but it's skinnier and missing some elements of the movie droid. It's different.

Disney's droid lacks the arms of the previous version, and it's a heck of a lot cleaner. The paint chips and damage are absent, there isn't quite as much paint, and the greeblies are all different. Disney's droid is crisper, with more easily seen rivets around the base of the dome. All of the grey painted bits are different, and the sides look a lot different from Hasbro's. Having said that, the big foot is pretty similar, the back is similar, and they both seem to be cousins. 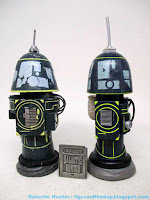 Disney's R1-J1 droid seems a little bit brighter with cleaner paint. There's a light layer of painted grime over the figure that's incredibly subtle too - and you can't ignore the brighter silver on the eye and the antenna. It's kind of impressive to see how Disney handled the figure with cleaner lines and sharper details, but the Hasbro one is so much more ugly that it's hard to not love. One stands out in the elements at a theme park, and the other has been through goodness knows what.

What makes this new Disney droid special is that it uses build-a-droid elements. You can pop off the dome and swap in an R2 head if you want, and the foot pops off too. Popping the foot off doesn't do you much good in terms of customization, because it doesn't have another part you can put there. You do get to see some hidden gears and guts though, and that's just plain cool. The ability to take apart the robot gives kids a chance to do something with it, making it more than just a nifty robot pepper shaker. Hasbro's figure has a moving head and foot, with barely-telescoping arms. I would say the Disney one is a lot more fun to play with, but for those wanting to fill out a Sandcrawler diorama you jut gotta get the Hasbro one.

I like this set and I get a huge kick out of Disney doing a new R1 unit. There's no reason to make one. No kid is asking for this. I don't think any collector wanted this, either, but they did a good job and it's fun to futz with. Also I'll take any new spin on a droid, mostly because it's better than getting another R2 or R5 in similar-but-different colors. If you see this set at a good price, get it.