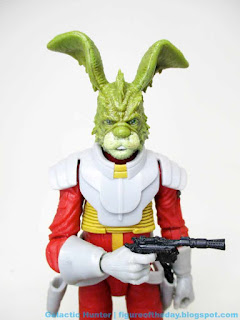 Bio: Jaxxon is a nearly 6-foot tall, green-furred, Lepi smuggler and captain of the Rabbit's Foot. Known for his wise cracks and high kicks, Jaxxon has helped Han Solo and Chewbacca out on more than one occasion. (Taken from the box, which elected to use a gray lettering on a black background. We're getting older, Hasbro, how about some brighter letters here?) 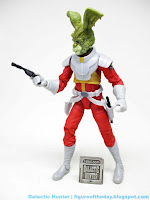 Commentary: When I found out Hasbro was doing Jaxxon, I was surprised. Very surprised. There were two characters on my "I want this but Hasbro will never make them" list - Vlix, and Jaxxon. I was expecting to pester Hasbro to get Vlix, and after I got Vlix, I'd ask for Jaxxon. (I've brought up Jaxxon, but not like Vlix.) I'm kind of amazed we got this character - best known as the butt of jokes made by fans old enough to remember Marvel's first non-movie stories from the 1970s - but he's here. He's real. And, most amazingly, he's a partial retool. The execution was excellent, and while this isn't the style I would have done, it's good.

Hasbro used Tatooine Luke's legs - note the wrapped boots - with X-Wing Luke's arms and torso. The armor is new, the head is new, and I believe the belt is new too. (I admit, I have a few The Black Series figures I haven't opened because I need to cut some lumber to make some risers.) All of the parts go together nicely, resulting in a 2021 figure that's made with the best engineering you could cobble together from 2013 and 2016. I don't mean this to knock it - while he lacks the advanced newer shoulder joints, the better elbow cuts, and the improved knees of recent figures, he's still good. The legs swing forward nicely, the figure stands well, and the range of motion on these particular elbows are good. The painted deco makes everything match, giving the figure that lanky build every interpretation of him so far has had. 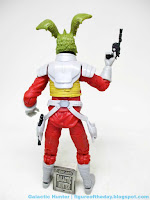 I didn't like the early pictures, and I'm not crazy about the saggy ears, but it certainly does add to the idea that Hasbro designed a toy figure head that's meant to resemble a real, wearable creature mask. Much like how The Retro Collection allows Hasbro to fudge the details of screen-used props and costumes - or to get them wrong on purpose to fit the style - Jaxxon is a weirdly realistic rabbit mask. While I would have preferred the cartoony, greener face, Hasbro's designers instead to opt for something that looks like it might not have been out of place in the cantina or in Jabba's palace. Using off-the-shelf costume elements to make the body makes it fit in with Kanan and Ezra and other non-cartoony takes on cartoony players, with proportions befitting some schmuck in a hairy dyed-green Don Post rabbit mask (that never actually existed.) This seems like it could be a costume that someone actually made for a convention or TV appearance, rather than the 1979-style Kenner sculpted head I probably would have held my breath and turned blue to get. I don't love the lighter green fur around the chin, but the subtle front teeth and lumpy fur don't look as bad in person.

Hasbro did a good job cobbling together a figure from existing parts. If you happen to find this figure for sale online - it is not expected to be in any big box stores, although your local comic shop is anybody's guess - I'd suggest buying it. Keep in mind Hasbro's velcro is stronger than Hasbro's glue on this (and many other) exclusive product, so that piece of velcro is likely to peel right off the cardboard when you open the flap. The book box is nice, but also adds waste in an era where Hasbro is gradually shifting over to greener packaging that may - and this makes me cringe - phase out plastic windows on boxes. But I digress. This Jaxxon is an excellent "realistic" interpretation of the character using existing and new pieces from the costume department, and that's praiseworthy. I would also totally buy a 3 3/4-inch Kenner-style one that looks like a sibling of the Walrus Man I have from when I was a kid, or even Greedo. Thousands of them, if necessary, to sell to the unsuspecting public. Just putting that out there. Get a Jaxxon, kids, don't wait for a sale and be sure to thank Hasbro for doing something completely crazy like this.