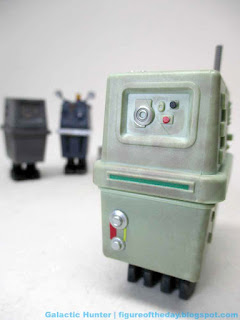 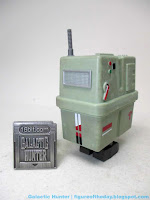 Commentary: This is a new sculpt! At first glance I wasn't sure if EG-01 was a retool of previous Power Droid figures or not, but it looks like they gave us something wholly new here. There are clearly some elements which seem to share inspiration - the guts, for example, may come from a similar digital sculpt - but the exterior and legs are new for this figure. In other words, you probably want it, and you probably want the set.

I make no secret of liking droids (the robots) and Droids (the cartoon) so any time Hasbro or Disney crank out something more than a repaint, I get excited. Disney hasn't fully exploited the existing Power Droid tool, and here we are with a new one. I'm OK with that. There are numerous riffs on these walking batteries in the games and movies, with this one coming from a theme park. You can see it outside of a store, and buy it. Should you? I mean, no, but we're us. We like this kind of thing. The green is incredibly pale, almost looking bleached by a star surrounding whatever planet he was on. The exterior is covered in nifty greeblies, with all sorts of buttons, switches, symbols, vents, panels, and of course the "E"-lookin' symbols we've come to know and love. He's even got a big antenna on it. The droid seems to be one of the largest 3 3/4-inch scale Power Droid figures, and certainly the mst ornate. The top of the head has nifty indentations, a hole for a hat/crane, and all sorts of little bits that arguably make it better than the flat, bland Sandcrawler droid or his tan Hasbro inspiration. (Which I also still like. But this new one looks cooler.) 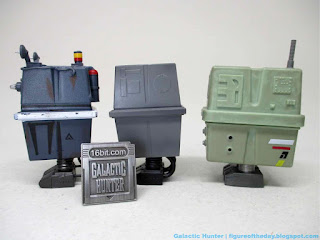 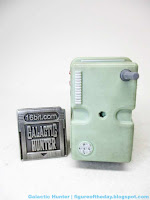 Articulation is two moving legs - they swing forward, and that's it. That's enough, really. The dome pops off to reveal vents and guts that look somewhat similar to other droids, but it's a new design with some minor differences. What surprised me is the smaller Power Droid's lid fits - it's a perfect fit. It actually lets you swap parts and customize your droids, which would be awesome if there could be more parts in a build-a-droid factory set. (Not bin parts, please. Boxed sets only.) If you somehow get stuck with a lot of extra droid parts and love to make your own robots, I think this feature is going to be a huge selling point. It's not easy to swap parts of differently sized figures. 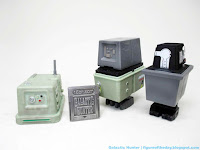 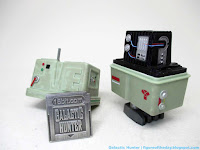 With incredibly subtle dusty dirt deco, this is a spectacular little robot with an abundance of detail we rarely see on a Power Droid. Someone over there did a great job, and it's a pity this is relegated to theme park souvenir status. Vintage fans would probably dig it, it's a great way to build out the Star Wars toy galaxy with a non-movie (I think) design as I am admittedly lacking in complete movie reference power these days. It's bigger, it has more detail, it's covered in little painted parts... you've got no real reason to skip this one. It's in a nice boxed set, and it's a cool droid. The only way it could be better is if Disney takes the mold and painted it in Kenner 1979 Power Droid colors, giving us the "close enough" Power Droid we've all been wanting for years now.