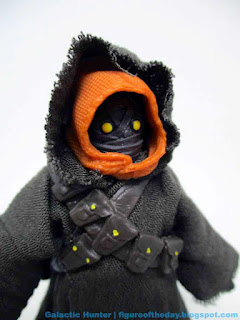 Bio: Jawas were a sentient species of meter-tall humanoids native to the Outer Rim desert world of Tatooine. Jawas who migrated from Tatooine were referred to as Offworld Jawas. (Taken from Wookieepedia. Package has no bio.) 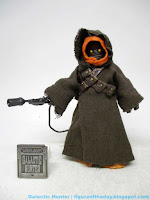 Commentary: A vinyl cape version of this figure would have been welcome too! This Jawa figure is basically similar to the idea behind the Offworld Jawa [FOTD #2,654] - but it's different. The core figure is the same as the other 6-inch scale Jawas, but the cloth robe is a new design based on the late 1970s revision of the Kenner figure, and it's one blaster short. Also it costs about the same, which is pretty great considering a lot of repaints have cost more lately.

This time around, the bandoliers are outside a new cloth robe - it looks neat! You can also see the orangey brown plastic underneath - which is basically the old Kenner colors, but maybe slightly more saturated. I love the bright yellow eyes, and I can't complain that the blaster is basically impossible to lose. It's not the blaster I would have preferred, but it works. I had a bit of a problem getting the gun in his fingers because the wrist joint isn't as stiff as some other Jawa figures I've bought.

I hope Hasbro finds a good way to give us a vinyl cape Jawa too - it might not look quite as good as the cloth one, because throwing a robe over a figure covers a lot of rough spots. Also it's a great robe - the hood fits nicely, and it's not as bizarrely terrible as some of the other 3 3/4-inch and 6-inch Jedi robes. (Come to think of it, how is it that they nailed it in 1979 but kept biffing it since 2005ish?) The figure stands well, and lacks the kind of superfluous paint we saw on Amazon's Kenner Obi-Wan Kenobi - if you look at his legs, they're in plastic color. That's the way Kenner did it... minimal paint, minimal articulation, maximal mark-ups.

The Jawa was one of my favorite figures as a kid, so I'm happy to have a new one. Hasbro has done a pretty good job making so dang many variations of the same figures that I can build an army without buying the same figure twice, but I also don't really have any reason to build an army without playsets or vehicles. He'll go nicely with R5-D4 and the rest, and I hope Hasbro continues to build out this concept with other figures. You really can't go wrong with retro Kenner styling... especially if that might be C-3PO in 1985 yellow style. C'mon Hasbro. Do it.