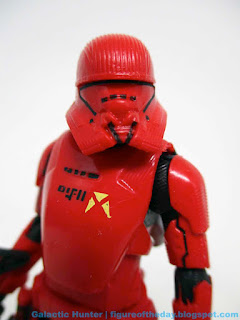 Bio: Sith jet troopers were Sith Eternal stormtroopers used for aerial combat. The 105th Battalion was a Sith trooper unit that included Sith jet troopers in its ranks. The troopers drew on a dark and ancient legacy for power.   (Stolen from Wookieepedia. Packaging has no bio.) 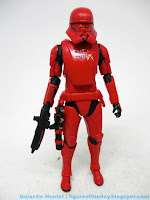 Commentary: I popped this figure open shortly before seeing The Rise of Skywalker and said "Well, I'll review it after I see the movie, then I'll have something to say about its function in the movie!"   It turns out that the Sith Jet Trooper is basically like Darth Vader's Security Force - a red Snowtrooper - from the classic Super NES game, Super The Empire Strikes Back.   It also has a squad mark on the chest, which you may have seen in the old The Empire Strikes Back Sketchbook or other sources of concept art.   It's basically the same as a Jet Trooper, except it has extra lines in it for some reason.  Much like the movie from which it came, it feels derivative.  Do you like troopers? Here's another one. 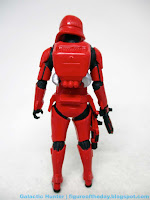 This does not mean it's a bad figure - as always, Hasbro tends to do a good job with its figures using the resources at hand to deliver increasingly well-executed products based on movies that this audience probably would gladly swap for a few retro characters.   Bend-and-swivel wrists, the double-jointed neck post, and thigh cuts are all here to give the figure an enhanced range of motion.   If you've liked Hasbro's new way of doing articulation since Rogue One, you'll no doubt appreciate the top-notch engineering here.  Two blasters are included, one of which can fit right in the thigh slot, just like other First Order trooper figures.

The jets on the backpack don't seem to be easily moved, so either my joints are stuck or mine was assembled poorly.  They're going in two different directions - it's silly.  From the front it looks fine, just don't look too closely at them.   Proportions, accessories, sculpting, and detail are all good here.  Assembly imperfections are hard to see before you open the figure, but I am currently wagering most fans aren't dying to troop build this guy and will probably buy a couple and call it quits.  It's good - and I hope fans get as many figures from these new movies as Hasbro deems worthwhile to produce, and/or that Disney wants them to produce.

The jetpack isn't supposed to be removable.