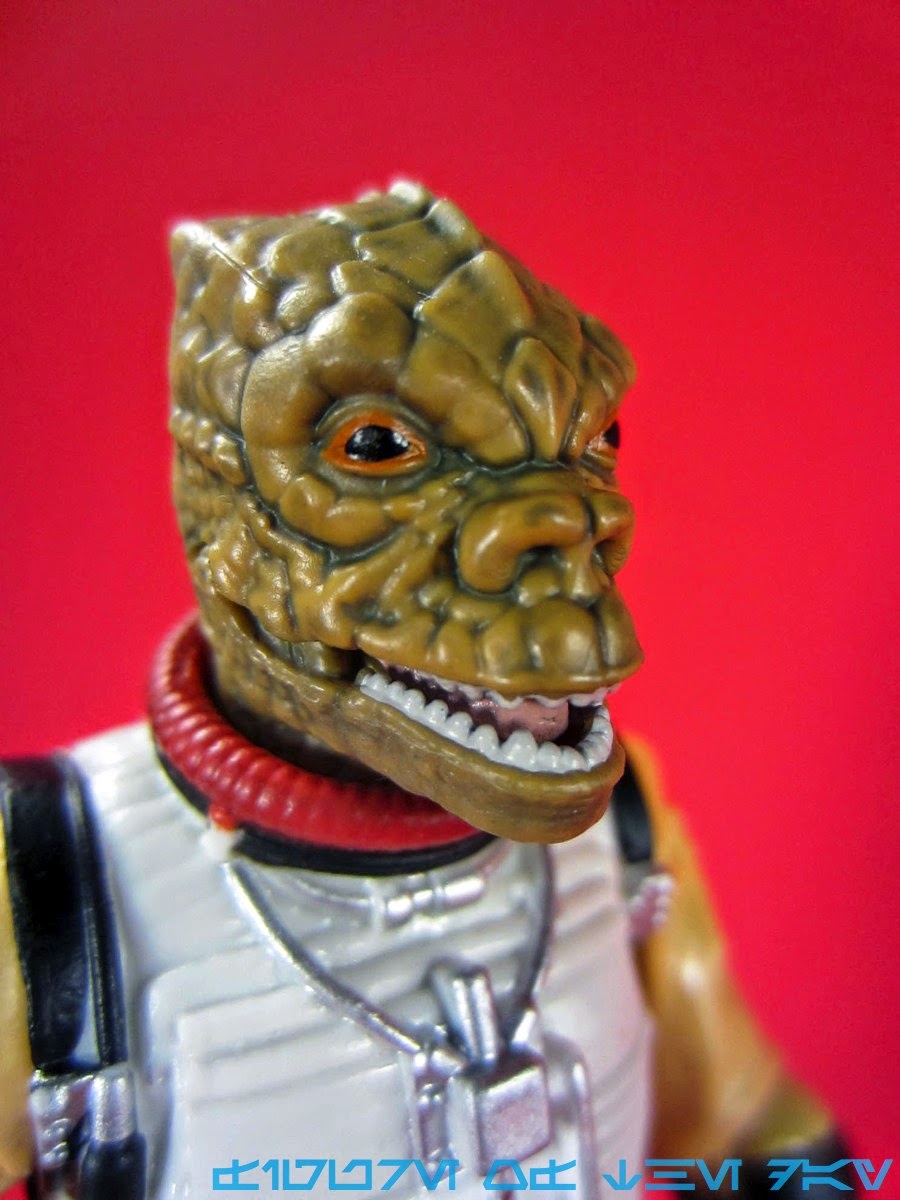 Bio: Bossk is one of the bounty hunters hired by Darth Vader to search for the Millennium Falcon and its rebel crew. (Taken from the figure's packaging.)

Commentary: You will not be disappointed by Bossk and I do not believe you will be pleasantly surprised, either.   This figure has a special feature that really sets it apart from his peers with the first-ever articulated jaw!  My sample may be dislocated, as it moves but it feels like it was assembled strangely - the it takes some doing to shut it.   But other than that, this figure is everything that his Mission Series counterpart isn't.  At a hair under 6 1/2-inches tall, he's a big enough figure with loads of articulation and paint, plus separately sculpted straps.  They did a nice job here. 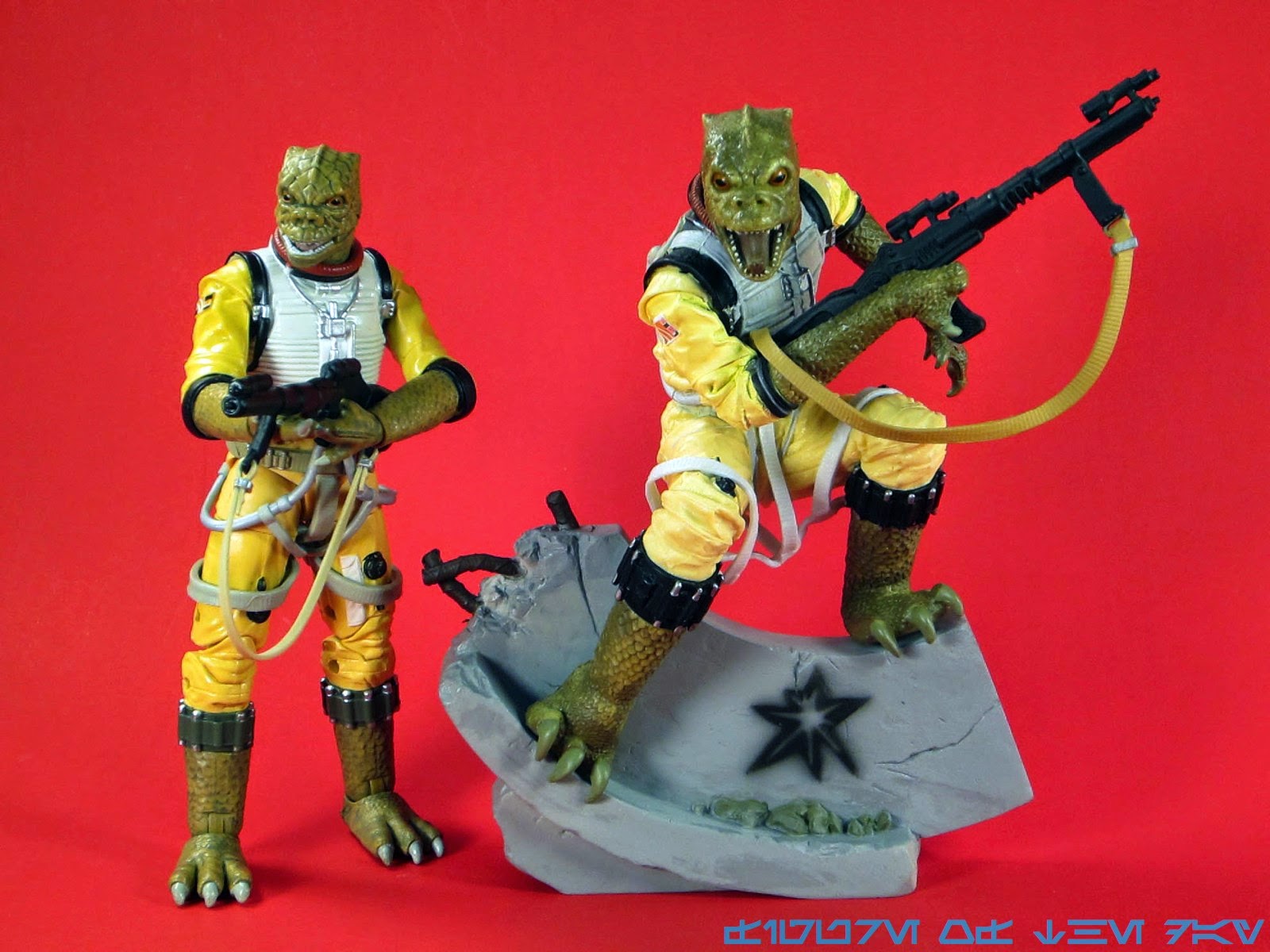 While light on deco, his gun deserves special notice.  You may notice that the gun has a brown strap with silver bands around it, but what's really stunning is that the strap is a separate piece.   You can actually remove the strap if you really want to - I don't, but as design elements go this is an extremely impressive level of detail for a Hasbro product.     The ability to pose the strap is something I've never seen on any of my figures of this size before, so just let me say I am easily impressed. 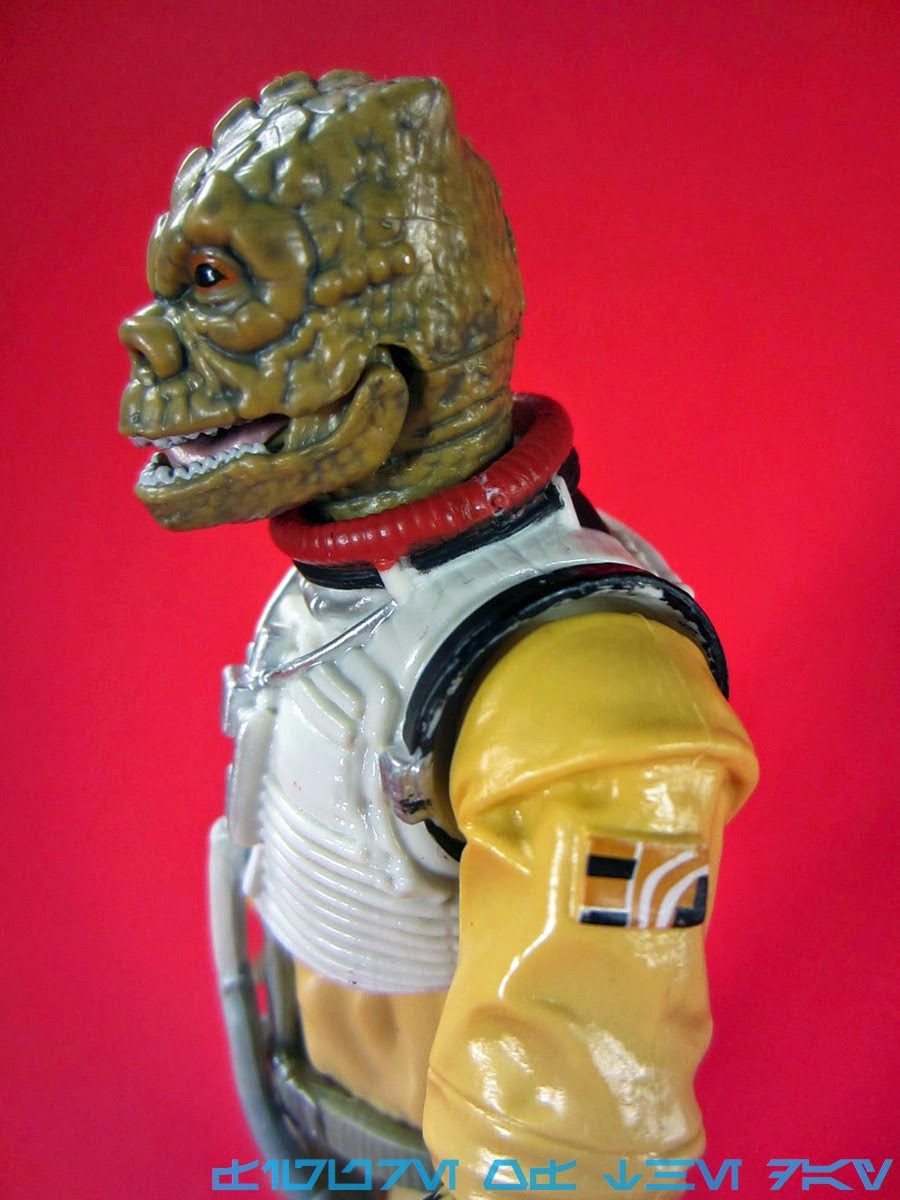 Finding good reference on the patches on his shoulders is tough, but it looks like most shots would indicate this one is off a bit.  The blue is a little thick, the red was left off, and compared with the Unleashed figure in roughly the same size the detail seems a bit off.  At this scale it's easier to see the colors are a little too faded and the blue design in the corner isn't quite right, but odds are you won't notice this too much.  Hopefully they'll tweak this detail on a future release.  These kinds of things are easier to gloss over on smaller figures thanks to the amount of detail you can get in there, but starting around this size you really start to notice. 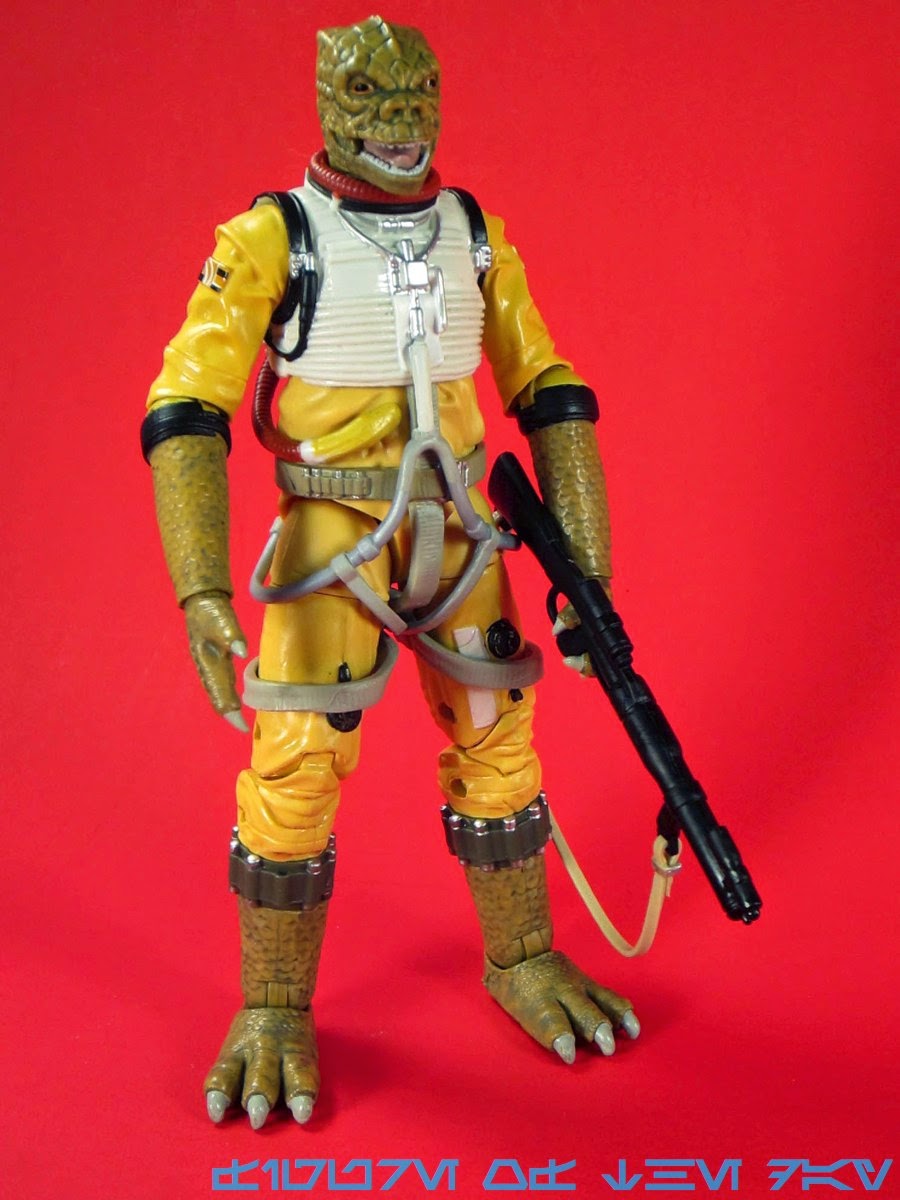 His head is great, as is the rest of the figure.  You get all the scaly detail you would hope for, plus a bit of a wash to bring them out.  His wrinkled flight suit is nice and yellow, with a few painted bits and pieces under the grey plastic straps.   All of his claws are painted, so in many respects this is like a slightly better upsized Vintage figure.   Depending on how you feel like counting, his 23 points of articulation are stupendous and the double-jointed knees are always a nice touch.  The elbow articulation is no better than what we had in his smaller counterparts, but the bend-and-swivel wrists are nice and the straight, arguably useless right hand is a nod to similar manual appendages on the many other Bossk toys from over the years.   The ability to get both hands on his gun changes his personality when you pose him, plus the fact that he's taller than Boba Fett (but just a hair shorter than Darth Vader) makes him a good addition to your toy shelf.

For $20 you're a putz to not buy it.  With $50+ Figmas and similar figures from Mattel at or around $30, Bossk is the kind of figure you would probably want to get unless you hate Bossk.  If you're trying to keep your 6-inch collection light, this figure does a very good job of getting the job done - for that reason, he's interesting.  On the other hand, Unleashed Bossk is a tad larger and the same price - but isn't articulated.      I'd suggest examining both and grab the one that fits your needs the best, whatever they may be.   I assume for most of you, though, articulation trumps pretty much everything else and the opening jaw, while a bit stiff, is a hard feature to resist.

Collector's Notes: I got this from Entertainment Earth.   I have not seen any in stores yet.

Email ThisBlogThis!Share to TwitterShare to FacebookShare to Pinterest
Labels: Bossk, Bounty Hunters, The Black Series 6-Inch, The Empire Strikes Back