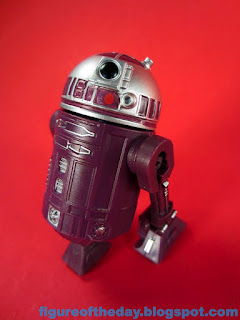 Commentary:  Disney's unique series of figures yielded new droids previously never before seen in plastic, and a few like this purple R2-Series Astromech Droid that should look familiar - very familiar.  This droid (or one like it) appeared in the original Clone Wars cartoons, briefly.  The coloring was a little different as the central eye had a purple square around it.   However, you'll note that this figure is actually based on Hasbro's previous R4-M6, making this a redux of that one.   The dome is alarmingly similar to that first version, although the contrast is a little different - the purple is a little redder, so the red light on his face blends in more.  Most of the panels are painted similarly, but you'll notice the holographic projector on the top of his dome now has an added purple detail around it - the previous version was silver.   Also, the front projector no longer has black painted inside it.   The panels are all filled in a little more than the least version, but as domes go it's strikingly similar to the original release to the extent that you may ask yourself why you bothered your dear friend Shannon to take time out of his busy schedule to buy this for you.  But you paid him back, of course, because while you're selfish you aren't a monster. 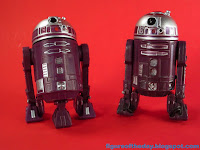 The body of this configuration was retooled from the pre-2015 editions.  The lower holes on the R2 body were removed, so you can't make a four-armed droid anymore.  The purple plastic body has silver markings, and works with the other purple domes in this collection quite nicely - and there are several.  By and large the paint applications mimic the Hasbro The Saga Collection R4-M6, but there's one significant change - they dropped the purple metallic paint highlights.  Those were largely invisible, so odds are you never noticed them in the first place, but they're gone now.  Rarely do I say that you won't even notice that the manufacturer dropped the paint, but in this case you really won't notice. Each leg is new - actually, it's only one leg.   Disney had issues keeping enough matching right and left legs during the 2012 run, so I'm sort of happy that they found a clever solution to the issue.  Each foot has been redesigned so it's the same on the front and the back.  It combines elements from both the front and the back of the feet of the first ones, while retaining the wheels and dropping the wires.  As such it isn't perfect, but it's pretty good.  This pair of legs is purple plastic silver highlights and silver markings where the toe wires used to be present.  The silver markings generally correspond to where they were on R4-M6, and the painted purple bits - like on the body - were dropped and not easily noticed.

The central purple foot for this (and all the other) colors is now unpainted, while the 2012 batch had silver markings around the bottom of the foot.   That's about all I got there.

This is a figure which could delight or infuriate - and truth is, I'm not sure which it is for me.  I'm fond of the whole switch-out-parts thing and the fact that there are purple R6 and R9 droids makes this one the least exciting of that group.   Also about six of the droids more or less exist as movie versions already, so this wave may not be the most exciting thing in the world for many of you.  If you don't have R4-M6, get this one - it's a fine replacement.  If you do, I guess you have to ask yourself how complete you need to be or just how much you need thirteen dollars.