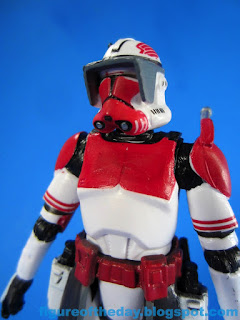 Commentary:  Taking the same mold as Doom, Commander Thorn is the clone that mashes up the Shock Trooper look with Marvel's Thor.   It wasn't a figure you needed or asked for, because it aired after the cartoon line was fundamentally dead - thus adding to the growing, obnoxious rift of two different styles of toys coming from the same media.   Some of the parts were used on Rex recently, so the kama and basic body are familiar.   The shoulder has a Cody-esque antenna and with a different belt, this would have made a great Phase II Cody. 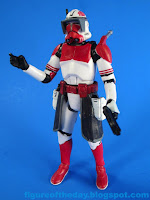 The paint job is a bit sloppy.  The wings rest high on the helmet, certain details are missing - like the pin stripes on the visor - and the white stripes on the helmet breathing tubes don't wrap around all the way.  His thighs are missing the red stripes, his chest is missing the rank marking, and there's no "damage" paint.  He doesn't even have the gatling gun, which was another joke - he's "Thorn" and his gatling gun is "The Hammer."  Get it?   Hasbro didn't, so neither do you.  You do get bend-and-swivel wrists, non-rocker ankles, and the usual gamut of Clone articulation.   14 joints can be yours, with a swivel waist that seems like a bit of a step backward.  Then again, I'd say that The Black Series 3 3/4-inch line as a whole has been one giant step backward for what was an evolving, great line in its previous Vintage, Legacy, 30th Anniversary, and other incarnations.   From 2006 to 2012 we had pretty consistent improvement - or at least a decent status quo - until Hasbro decided that "Black" meant "premium" and that "premium" meant "not."  We did get the premium pricing, though, so I guess at least there's that.

As the only Thorn action figure, you probably know where this is headed.  You don't have options, you probably won't see much of it, so you should buy it if you want a Thorn.  And based on the Netflix-exclusivity of his appearances, odds are not a lot of fans are jumping at the chance to own him either.  This is by no means a terrible figure, but it definitely seems like a figure that went through a series of approvals that were merely shrugs, not bothering to check the reference material or either not understanding (or caring) how the deco could look. I could see the gun being a budget thing.  I can get that the grey flourishes on the visor are tough to do.  But the red on the thighs?  The correct length of the white stripe?  C'mon.   These can be better.   Given the price, an extra gun would have gone a long way, too.   If you have been cured of completism, save your money.

Collector's Notes: I got this online - you can probably score one for $13-$15.  I opened one that had only one wing on his helmet, which I realized after opening it.  So be on the lookout for that, I assume it's not a variant and just an error.

I was also pretty disappointed they did not include what should have been the no-brainer "Hammer" gun accessory. I mean it's not like they don't already have a mold for that from a half dozen other figures...

And I do like having Thorn to support the making of more odd clones and to add to my other shock troopers and Phase II Fox, but deep down I know it really is just another half-butt Frankenstein's mish-mash repaint...

Thanks again for another good FOTD write-up and all your posts over on the main site.

The Black Series has definitely cured me of completism... these figures are such a step backwards. I'm definitely interested in figures we've never gotten before (even if they are clone repaints/mold mash-ups) but until Hasbro steps up their quality control, I'm passing. Thanks for the continued look at these figures opened up Adam!