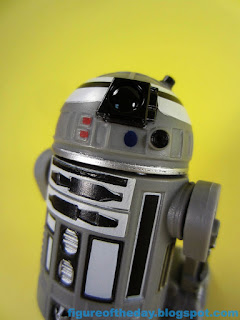 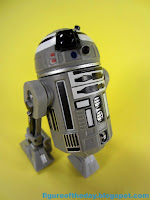 Commentary:  Back in 2005 I was working at another job and sketched out an idea for a Hasbro exclusive that, as it turned out, I would make happen a few weeks later.  This R2-Series Astromech Droid is a remake of one of the two core figures I had to have, R2-Q2.  I wrote up a proposal with some reference shots and gags about his being a double agent, and now here we are - version 2.0.  It's a sidegrade.   It's not better, it's not worse, but it's different enough to make me glad I bought one.   The droid was supposedly both an Imperial droid and Biggs' droid, or there were two of them.  So now you can have two of them, too.  The deco of the Disney version is largely identical to the 2006 Hasbro release, with the same basic color layout.  The main differences are on the dome, and at first glance you might not even realize there were changes.  The 2006 version has a silver ring on the top panels, the 2015 Disney one is unpainted.  The 2015 Disney one has a glossy big eye, while the previous version was matte.  The holo projectors are all slightly different, with a black tip on the 2015 versions.  The 2006 ones were each a little different.  The glossy eye does add significant life to the design, though, so I have to give a slight edge to the new one. 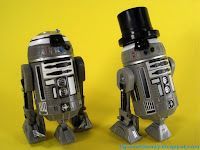 The body of this configuration was retooled from the pre-2015 editions.  The lower holes on the R2 body were removed, so you can't make a four-armed droid anymore. The grey is a touch lighter than the last one, with slightly cleaner paint masks.  Since so much relies on black and white boxes with borders, in many respects the new one looks a little bit better.  Everything is placed in basically the same place, with minor changes on how some borders are painted on the black and silver bits on the front.  It's differentish, but not overwhelmingly so.

Each leg is new - actually, it's only one leg.   Disney had issues keeping enough matching right and left legs during the 2012 run, so I'm sort of happy that they found a clever solution to the issue.  This pair of legs is grey plastic with silver markings where the toe wires used to be present.  The sides are black and silver, with added silver paint on each foot - that's new for this release.   It's not bad.  It's not impressive either.

If you missed the Entertainment Earth exclusive set in 2006, this is a perfect substitution.  It's roughly the same quality and colors, so unless you need every last release (I do) or foot hoses, either one should suit you just fine.  The big question in terms of playability is if you want removable limbs or the retractable third leg.   Either way works for me, but this one has a slightly notable bonus asset.  The top of the dome is black - so the hole for the hat peg is largely invisible.  It looks so much nicer now that it's not an eyesore.