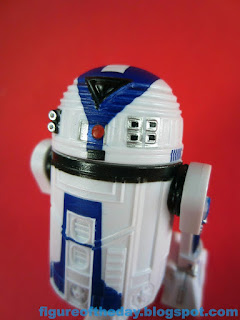 Commentary:  Here's another one!  The R7-Series Astromech Droid is delightfully weird, and seemingly exists to match up with the R2-D2 colored parts.  He shares the same legs, but the torso and dome best match up as a pairing.  I have no idea what the designers were shooting for here, as I am not particularly well-versed with droids from non-visual sources.  Could it be from a book?  Maybe!  I didn't see them all, but I will say it's pretty neat.  The rocket-shaped area between R7's legs is, um, certainly interesting and now perhaps you can't unsee it either.   The head is mostly white, with a dark blue wedge that has a white "coin slot" on top not unlike a bank.  It's strange - we haven't seen anything else like it on one of these droid toys yet.  It's something new - real new, with red and black and silver markings in a pattern we didn't have as a toy before.  I love it. 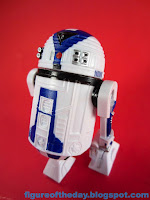 The body of this configuration was indeed retooled.  The lower holes on the body were removed, so you can't make a four-armed droid anymore.  The white plastic R7 body has a blue... uh... he's happy to see you.  I guess you could also say it's a giant "A", but... I don't know, man.  I feel I've seen Rainbow Randolph make cookies like this.   The back of the body has a black collar which goes all away around the body, plus a series of blue painted panels.   Parts which you might expect to be painted silver on both the front and back are unpainted, a departure for this kind of droid mold.  Those vents and bars are typically silver.  With added blue and black panels on the bottom of the body near the central third leg, it's certainly very different than the others. 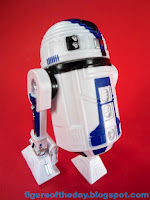 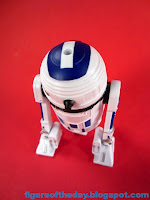 As this is an uncommon droid mold with a totally new paint job, you have to get it.  Because the paint job may inspire the giggles, you're only hurting yourself by skipping it.