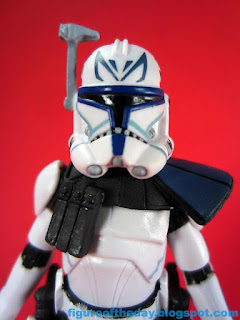 Bio: Captain Rex  fights beside Anakin Skywalker during the Clone Wars.  (Taken from the English section of the figure's multilingual packaging.) 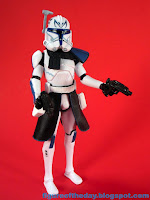 Commentary:  You probably don't have this figure.  In 2012, Hasbro pulled back on Star Wars in a big way - the last wave of Darth Maul-bedecked Movie Heroes never came out in the USA, and none of the 3 3/4-inch Yoda cardback figures got out in the USA.  We had to go to Europe, or do without.  Many were repacks and resculpts, so most people didn't notice or care.  Captain Rex looks a lot like a figure we did get, but it's not.  It's probably a textbook example of "just different enough to make you mad," with unique deco, retooled legs, and a unique weapon.   You won't even realize you skipped it, because when it was announced at Celebration VI amidst a pile of repacks and retools you - and by you I mean me - were probably vocalizing your displeasure at the presentation.  The final batches of Movie Heroes, The Clone Wars, and the first Legacy figures were largely populated by remakes of things we had, with newly tooled versions of figures we already had.   It was a pretty miserable show.

Anyway, this Rex is a redux of this figure.   Hasbro dropped the gorgeous weathering, changed the "kill marks" to black (and also dropped some of them), and changed the blue up a bit.  Some marks on the helmet were also changed, and the rangefinder is now unpainted instead of gunmetal silver.   In terms of looks, this is a step back overall.

The most notable change were that the legs were given knee joints.   The figure has no ankles or wrists, but Hasbro added knees - this is fine evidence that reduced articulation was not only a long time coming, but Hasbro started it in 2012/2013.   It's not new - costs and a supposed non-interest from American retailers were the reason why this wave didn't come out here, but there's probably a lot more to it than that.   It's a nice figure, but if you already had the last one, you probably didn't see a reason to upgrade. 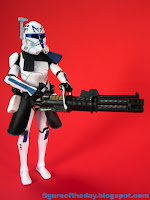 His gun is one of the most interesting things.  It's partially painted with silver and copper markings.  The grip rotates, and another handle is articulated.   While the packaging boasts that it spins, the reality is that you can twist it if you get a good grip on it.  If you try spinning the barrel while the figure is holding it, you'll rip it out of his dainty hands.  It's not bad to look at, but let's be honest - it doesn't really spin.   It is, however, a nice display piece.

So let's say you skipped this one, which is likely, since it never came out here.  Should you get it now?  I'd say only if you're a completist or a die-hard Rex fan.  You've got numerous cheaper alternatives, many of which include spring-loaded rocket launchers or jet packs or weathering or more articulation or a removable helmet.  You've got every reason to not overpay for this one, although if it were here for $10 you'd probably have rolled your eyes without even realizing that it was new.   For the hardcore among us, this is one of the reasons a new movie is a blessing - nobody has a Finn or a Kylo Ren.  It's clearly new.   For fans of the cartoon series, though, these figures will probably get a little more expensive as they realize their collections are incomplete and they get full-time jobs to pursue toy collecting.  They might not get much higher than they are now, but it's one of about a dozen examples of Hasbro not releasing Star Wars action figures in their target market.  We'll get to the others eventually.