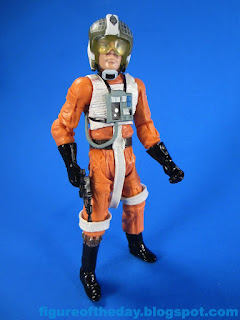 Bio: Jon "Dutch" Vander is a Rebel Y-Wing Pilot in Gold Squadron, which makes the perilous run along the Death Star's trench to reach the battle station's vulnerable exhaust port.  (Taken from the figure's packaging.)


Availability: Click here to buy it at Entertainment Earth now! 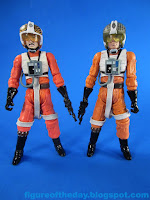 Commentary:  It's sort of amazing which figures haven't been updated by Kenner and Hasbro in the last 20 years since the line's relaunch, but even more amazing are some of the ones they've done more than once.  It was pretty improbable to get this figure once, but to see an updated Jon "Dutch" Vander is kind of ridiculous.   "We want more pilots!" and "We want more Imperial Officers!" is a common refrain from fans, but as we've mentioned before - specifics are far and few between.  The last version of Dutch was in 2003, and I assumed that would be the only version.  He was built on a pretty good body, and it looked more or less like what you saw in the movie.   This new version builds on a 2008 body which (along with Luke's) has provided most of our orange-suit pilots over the last few years. 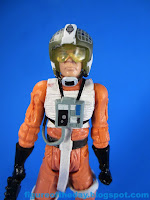 If you bought the 2013 Biggs, it's basically the exact same tooling with a new human head.  The orange is different, the other greys and helmet deco are different, even the black on the boots isn't quite as glossy.  I daresay I like how Dutch looks more than 2013 Biggs did, but it's not exactly a necessary upgrade and is a pretty good example of how the 3 3/4-inch The Black Series line has been something of a mess since its inception as the remainder of The Legacy Collection MK II.   "Old figure with new head" made up much of the line, selling fans figures they may already have bought at higher prices with lateral improvements.  This figure is by no means bad on paper, as having bending elbows and ball-jointed shoulders is a must for so many fans - but then again, if you have a shelf filled with pilots, their exact poses matter less than if they can stand.  Or fit in the vehicle.   The deco on the helmet is good, and matches some replicas and shots from the movie nicely.  More dirt and grime would be nice, particularly given how little had to be changed for this figure, but such is life.  Hasbro dragged this line out and didn't exactly inject it with life, so now you can buy a figure that probably ate up a slot for a potential new character or more interesting redeco.  It's probably not fair to deride a figure for not being something else, but at this point getting the second version of a lesser figure where new tooling was required is sort of maddening.   We could have had that missing Vintage Bespin Guard, or the Power Droid, or even another Clone.  But no. 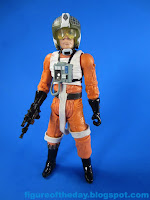 So!  He can stand, he can sit, he can hold and wear his accessories.  He can do what a pilot should do.  Hasbro did the best they could using the molds they had handy, and indeed a new mold probably wouldn't have brought much new to the table.  On the other hand, we're being charged close to double what a similar figure from the same mold cost around 2008 and it's not like this was a character that demanded a reissue like the still astonishingly unrereleased Darth Revan or a few video game repacks (Starkillers) that could probably have generated some revenue - particularly the first game's figure with a new head.   But that's just from where I sit.  Seeing a line like this fade away on a whimper feels like it happened by design and figures like this are part of the reason why I've been bagging on it over the last few years.   It's not good enough to be good - at this point, at the very least, the character selection should be interesting or fit a need in the marketplace.   So - recommended if you don't have a Dutch Vander, a worthwhile upgrade if you do (or just want to cram the old one in a vehicle).  But it's not going to look any better when you swap it out on your shelf for the old one.

Collector's Notes: I got this online - you can probably score one for $13-$15.   I've seen it in stores, too.   Two packaging variants exist - the first release had an all-English package with a bio. Subsequent releases were on multi-lingual packaging.

Those shoulders look terrible; not my favorite pilot mold.