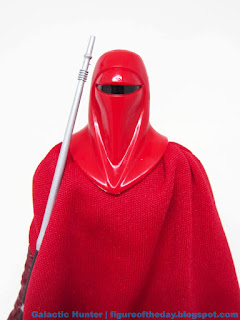 Bio:  Resplendent in crimson robes and armor, the Imperial Royal Guard protected the Emperor.  Secrecy shrouded the Guard, with rumors abounding about the sentinels' backgrounds and combat capabilities.  (Taken from the figure's packaging.) 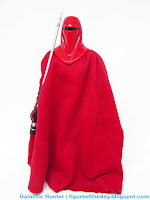 Commentary:  What's sort of fascinating about the 6-inch Imperial Royal Guard (also Emperor's Royal Guard, Red Guard, Crimson Guard) is that the 3 3/4-inch version offers more.   The 6-inch version is bigger and offers more heft, but if you want options the 3 3/4-inch Vintage Collection/Black Series version reigns supreme with shoulder armor, a human head under the helmet, and a double-bladed pike.   This 6-inch figure offers an experience that's a bit closer to the movies, in that you don't see much that wasn't on film - with one big exception.

As I've never seen under the red guard's cloak, I only know that I heard in the original trilogy they had elaborate layers and tassels that few human beings outside Lucasfilm have ever seen.   Thanks to the Crimson Empire comic books, now everybody makes merchandise of the figure with armor under the big red barber's tarp.  You get a fantastic amount of articulation, consistent with other 6-inch offerings, and a level of sculpted detail that at this point won't surprise you.  It's good.  It's sturdy.   It can stand.  The helmet is glossy and doesn't pop off - it's a good piece for the asking price. 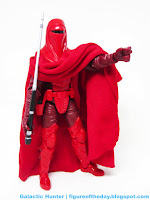 A tiny blaster fits in his hip holster, and it may as well have been left out.  It's too small - it's almost the same size as the 3 3/4-inch equivalent blaster.  Authentic or no, sometimes you need to exaggerate the size of things for them to register a bit.  This was common in the 1990s, especially in Playmates' Star Trek line where they actually explained on the packaging that the heads and hands were intentionally enlarged.  I appreciate the candor.

Good cloth elements are tough to do well, and I'd say Hasbro did an admirable job here.  If you straighten out his cloak a bit, it looks pretty good - the soft goods material feels right in the hand, and hangs well.  It's tough to get right, because if you picked the same material used on a 6-foot man it wouldn't look right either.   Considering all this figure needs to do is stand there, look red, and hold a pool cue, it's nice to see Hasbro sculpted the hand perfectly and gave it so much additional articulation that an aspiring customizer or even Hasbro could whip up other guards or Kir Kanos out of the basic figure design. 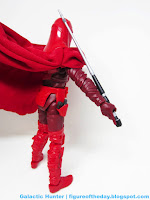 It goes without saying that you want and may even physically need this figure.  I want more, but am basically giving up army building in the larger scale to keep sane.  If you se it at or near the $20 price tag, buy two.  Buy six.  Buy a ton.  Your Emperor commands it.   Hasbro has gone through many of the major Imperial troopers and guards quickly, and at this point the next one I would probably push for would be one of the Death Star Gunner figures.  I hope you can find one, or pre-ordered one so you can get one.

Email ThisBlogThis!Share to TwitterShare to FacebookShare to Pinterest
Labels: Attack of the Clones, Empire, Return of the Jedi, Revenge of the Sith, Rogue One: A Star Wars Story, The Black Series 6-Inch