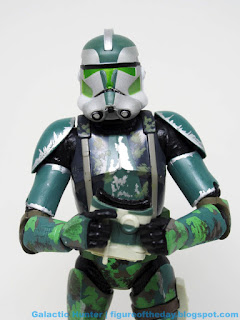 Bio:  Clone Commander Gree, Designation 1004, led the Elite Corps of Republic troopers during the Clone Wars.  He saw deployments on such heated  battlefronts as Kashyyyk.  Though a faithful commander who carried out the Jedi's orders, Gree was ultimately loyal to the Republic. (Taken from the figure's packaging.) 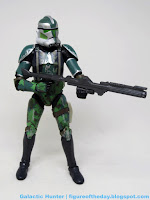 Commentary:  Hasbro is taking it easy with the Clones in the 6-inch line.  After several years,  Clone Commander Cody is only the second commander from the final prequel to worm his way in plastic.  The figure required some new tooling, with a new paint job that's sort of close to the movies.  It's off a bit.  It's really a good effort, were it a custom you might be OK with it.  I assume we'll see a variant down the road. 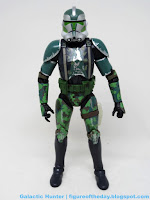 In terms of deco, the forearms and thighs are a bit greener as opposed to other figures and renders which tend to be browner.  The visor is less metallic than many of the other high-end (and some low-end) representations.   The damage deco is a little different, but other than that it's a good replica.  It's not like it's really off - it's just different.   The suspenders are painted, the ammo pouch (I assume) is painted, and the silver looks good. 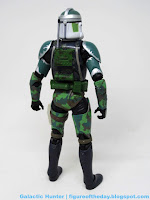 The torso and left thigh are newly tooled, with an extra pouch on the leg and some more changes on the body.  The most important one is the antenna - this is removable.  Mine just fell out shortly after unboxing the toy.   You'll want to be careful about this, because it's easy to lose.  You may wish to glue it in place, or buy a second one for when you inevitably lose the first one.  (I'm strongly considering buying a second one if it hits Toys R Us out of fear of losing it.)   Articulation is basically the same as the other Clone Troopers, mercifully keeping the double-jointed elbows which have been largely bred out of the line over the last few years. 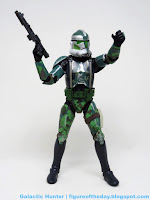 The two blasters are in a dark grey color with no decoration, making them a little different than you may be used to seeing on these figures.  Joining them are macrobinoculars, painted heavily and easily held in his hands.  He can't quite get it perfectly up to his helmet's visor, but he can hold them convincingly in one or two hands.

I'll give this 6-inch take on Gree the same praise I give a lot of first-timers.  It's OK.  For a 12-year-old-design, I would hope it'd be perfect... but it's not, and we still had errors in designs during the franchise's 30th anniversary.  If we ever see clone commander multipacks with a deco variant, you may want to check that out first.  Failing that, this is the best version in this scale from Hasbro yet.  It's decent and will look good on your shelf.

Collector's Notes: I got mine from Entertainment Earth at San Diego Comic-Con.