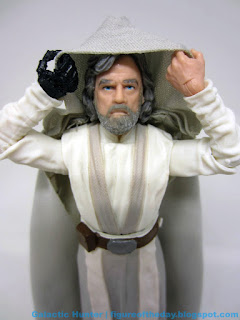 Bio: After tragedy destroyed his attempt to rebuild the Jedi Knights, Luke Skywalker vanished from the galaxy.  Now, the resistance needs his help to thwart the efforts of the evil First Order. (Taken from the figure's packaging.) 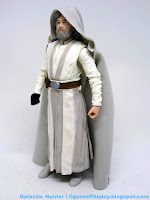 Commentary:  If there's one figure fans were made didn't make The Force Awakens' launch window it's Luke Skywalker.  When people asked "Where's Rey?" the answer was usually "Selling slowly until the movie hit theaters," whereas Luke's presence in the movie and the toyline wasn't questioned all that much.  General Leia didn't make the cut, and Han Solo took a while - but Chewbacca was out on day one.  Why?  This sort of thing bothers me, especially since it'd be so, so, so much easier to sell Luke, Han, and Leia over Finn, Rey, and Poe.  Back then.  Now?  I'd say it's a toss-up, mostly.

We're expecting Luke in the main line in about a month, so you should be able to get him in new packaging.  And he's great.   There's no lightsaber, but you get a cloth cape that hangs fairly well and is closer to what would look like a Return of the Jedi prop than something from the prequels.   The cape is light and thin, and hangs fairly well.  It's better than much of what we've seen in the past, but there's always room for improvement.  The figure itself is a lot like an Obi-Wan Kenobi.  The long robes block some leg movement, but not to the extent where the generous leg articulation becomes worthless.  He has double-jointed knees, rocker ankles, swivel thighs, and other bits that just aren't necessary given what the figure is right now.  If he has a big action scene, I would hope they redo him with cloth bits and a lightsaber.  The head sculpt is good with decent deco, but mine has some clear glue melting down from under his hair.   Arm articulation is par for the course, with bend-and-swivel wrists, elbows, and shoulders. 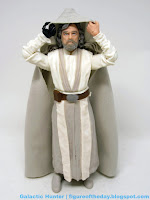 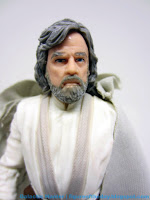 It's Luke! That's all you need to know.  Do you want an old man Luke figure? This is one.  I don't know if there will be other variations of it, but as it is, it's not bad.  I like it enough to have got one at Comic-Con, and it's my hope the regular retail release is unchanged or only slightly different.

Collector's Notes: I got mine from Hasbro Toy Shop at San Diego Comic-Con.    The figure's date stamp indicates it was manufactured in April 2017, which means Hasbro has factories that are better at keeping a secret now.  Luke's belt has a hook for a lightsaber, but the figure itself doesn't have one - perhaps Lucasfilm and Disney are keeping this secret for the main release, or an accessory with a future figure so we can arm Luke at that time?