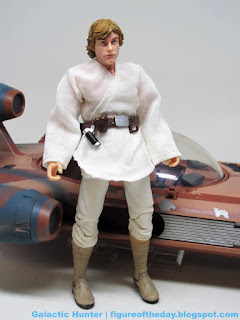 Bio: The X-34 landspeeder was a model of civilian landspeeder manufactured by SoroSuub Corporation and available during the Galactic Civil War between the Galactic Empire and the Alliance to Restore the Republic.   (Stolen from Wookieepedia.) 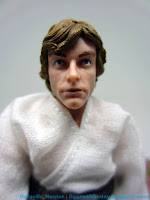 Commentary:  There have been no shortage of 6-inch Luke Skywalker figures over the last year.   A basic boxed version hit in 2016, and now this version hit Comic-Con in a really nice heavy-duty window box with added accessories and deco.  A non-exclusive release of the vehicle is due out in about two weeks.

This new version of Luke should be similar to the next figure - but this one has more accessories.  The figure's clothing has a different cut and a different texture.  Depending on how you pose it, I'd argue this is the superior version.  The plastic is a bit more saturated, reminding me more of the original Kenner action figure - sort of.  The shoes and boots are lighter, as are the pants.  His skin tone is a little less pale, and hte head is completely different.  Now Luke has a less translucent face, wilder, darker brown hair and painted lips that I can't say are perfect, but are better than the previous release.  The portrait is a little bit better, but it seems getting Mark Hamill's hair and face just right may be a scientific impossibility.  Under the right lighting and at the right angles, this looks perfect - but otherwise, it's just pretty good.  Overall, it's better. 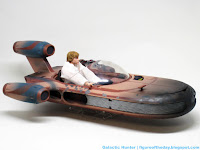 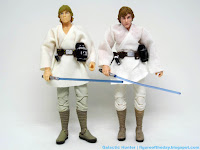 His gear includes everything from the previous Luke - Lightsaber, Macrobinoculars - and adds the hat and poncho.  I'm not 100% sure but I believe the poncho is exclusive to this particular convention edition - plus you could give it to Qui-Gon Jinn, if you really wanted to do so.   The figure's articulation is good, but the arm joints may pop off if you're not careful.  They pop easily back in to place, and that's what matters. 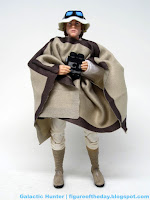 The Landspeeder itself is impressive, but gets one tiny detail annoyingly wrong.  As you know, R2-D2 could be mounted to many of the previous Landspeeder toys, as that's how he was transported in the movies.  The instructions show a hole to connect him, but it's in a different place on the final toy and doesn't quite work.   Maybe the non-exclusive edition will fix this.  Everything else is a blast.  Pop off the windshield to pose Luke's hands on the controls.  Two storage bays and an area behind the seats allow for storage of accessories.  A clear plastic piece acts as a stand and something to give it the illusion of hovering, which is a surprisingly good alternative to the spring-loaded wheels we've been given over the years.  It sports a clip for the rifle and an opening hood, complete with an engine with a spinning motor piece.   The spinning element is exclusive to this edition, and probably shouldn't be a selling point if you just want a Landspeeder.

I like this figure a lot - the added gear and vehicle make it great.  As I believe I read the regular edition would be $60, it's probably not worth the premium pricing unless you're a completist, and I would probably say that about most 6-inch convention exclusives as of late.  (Bless you, Hasbro, for not making new characters for the events.)  It's big and impressive, in a nice box with a good heft to it.  You can also display the vehicle in the box after defiling it - I appreciate that.  Get it if you're so inclined, it's pretty good!

Collector's Notes: I got mine from Hasbro Toy Shop at San Diego Comic-Con.