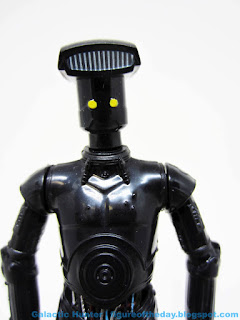 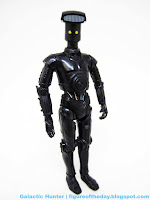 Commentary:  The new head! The Black Vendor Droid is basically the new head from The Clone Wars, now in a handy glossy black color.   It has a big silver thing on its head, like a hat, with yellow eyes and whatever body you give it.

The glossy black finish is super shiny to a ridiculous extent.   It's gorgeous, and I wish I had a better display to show these sorts of figures off.   It stands, it looks cool, it has articulation.   You know the drill.   So far I've only heard of these in Orlando, but I also don't pay super close attention so maybe they're in Anaheim by now.  The droid is curious in that Disney opted to make this design in colors that were never actually seen on the show, so perhaps those are coming later.  I can hope.  It's still nifty and if we had a decent playset that worked for it, he'd be right at home.

Column Notes: We are going on a brief hiatus due to an excessive amount of travel and The Last Jedi launching - so we'll be back with new stuff as quickly as availability allows on or after September 1.  Until then, please visit Galactic Hunter and 16bit.com for more toy news and reviews and dubious opinions.