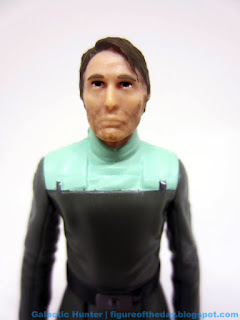 Bio: A scientific genius, Galen Erso was coerced by the Galactic Empire to help develop weapons of ultimate destruction.  With deep regret, Erso perfected methods to harness the magnifying effects of kyber crystals to power the Death Star's planet-shattering superlaser. (Taken from the figure's packaging.) 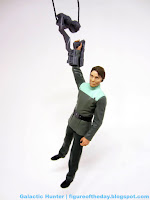 Commentary:  It took me a while to crack open Galen Erso because I didn't feel great about the line being over - and thanks to someone working somewhere, it isn't.   It's merely one of the later figures.   Hasbro did a great job designing this figure and a good job with the head - coming up with the right amount of scruff and sadness on a human face at this scale  is a challenge, particularly when you have certain cost metrics to meet.  The uniform is a good recreation of the movie, down to the science patch.  The colors maybe could be better, but it's still good.  It looks like Mads Mikkelsen, with a good sculpt slightly marred by soft detail in the plastic.  It's clearly  him, though. 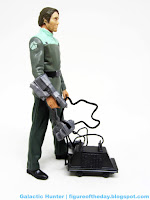 He has no problems sitting, standing, or holding any of his gear.  The zipline fits in his hand better than any other in the line, although its design doesn't lend it to zipping forward particularly well.  It's a good design though.  The blaster is classic fare, also fitting in his hand easily.   What really makes the set sing is the mouse droid, complete with teeny tiny rolling wheels.   I think it's my favorite Hasbro mouse droid so far.

It's fun, it's neat, and I'm kind of amazed it even came out - sometimes these tail-enders vanish.   It's one of few (perhaps the only) scientists the Empire ever gave us as a figure, so it's nice.  Maybe we'll get more some day.