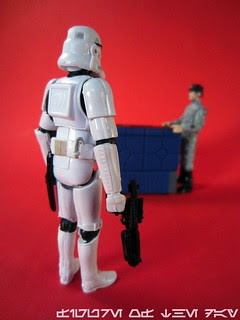 Bio: The Millennium Falcon is captured by the Death Star.  A scanning crew searches the ship while Stormtrooper TK-421 stands guard outside the ship.   (Taken from the figure's cardback.)

Commentary: We're back - but just to give everybody a quick look at some new figures, and if the reads are good I'll keep doing this for other new figures as they arrive.  Figure reviews are hard to do, but FOTD? Not so tough.  We'll be back to look at Kmart's six new figures starting with the Stormtrooper TK-421, which as far as I can recall is the first Stormtrooper to get his own name on the box.   The figure is basically an enhanced The Vintage Collection Stormtrooper from the Original Trilogy Collection days roughly nine years ago.  The body is the same - same 14 points of articulation, same white plastic, same sort of cool, sort of awkward pose.  His legs can swing forward better than I remember, but the holster dangling down the back gets in the way. (Spoiler: gun cannot fit in holster.) 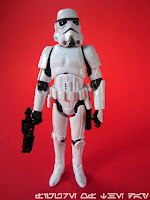 The gun is one of two notable accessories - why notable?  This uses the new, articulated version of the stormtrooper blaster that allows multiple positions.  Considering it was previously available with a tough-to-get Vintage 2012 Stormtrooper, odds are you'll want to get one of these just for the gun.  His other new gizmo is a new communicator that clips to his belt.  It's one of the smallest Star Wars accessories ever made by Hasbro and I have no doubt it will be frequently lost.  It easily fits in his hand or on his belt, but I can tell you I'm already terrified that it's going to get lost in the carpet.  It is the most swallowable piece I've ever seen with an action figure.  You wouldn't even know you ate it, that's how small it is.  We're talking sesame seed small.

His belt has been retooled slightly and no longer features a grenade canister on the back.   Instead, there's a beige panel with what seems to be a grappling line off to the other side, not unlike the one Luke used.  I don't believe I've ever seen this belt on a Stormtrooper before and I'm comfortable calling it new for this release - one of you will scream at me if I misremembered.  This figure is part of a set with a new-headed Imperial Technician and the top half of the Scanning Equipment you bought back in 2009, so it's a no-brainer - you want this set.  TK-421?  New troopers?  New accessories?  For $16, you could do a lot worse - and worse is called The Black Series 3 3/4-inch.

Collector's Notes: Hasbro didn't go out of their way to tell you how awesome this set was - which is for the best, given Kmarts are closing left and right.   Both figures are worthwhile and in my one sighting to date, this set was in the shortest supply - no surprise there, as it's easily the more desirable of the two.  If last year's Ewoks and AT-ST is any indication, there were probably a large amount of these made and they will continue to trickle out through the season.  Don't overpay just yet, unless you don't live near a Kmart.  In which case, go ahead and overpay.   $20-$25 feels totally fair, $30 feels like what we'll be paying anyway in four years.  Go ahead and get this set, you'll be glad you did.  Oh, and it's worth noting that the packaging is mostly air - Hasbro could have made this half the size, easily.

Great news that we're gonna see a few more FOTDs. Now, d'you happen to know if there's a distributor for these over here in the UK? I need that scanning equipment and toddler-unfriendly communicator, dagnabbit.

YAY!! FOTD was a part of my morning ritual for years! I'm glad it's back, even in limited form

This stormtrooper is the one from whom Luke steals his costume. This belt is the same one that Luke would have, with grappling hook and comlink. Too bad this won't see a wider release.

That communicator is tiny, but I think the single bullet that came with the G.I. Joe 30th Anniversary Low-Light has it beat. That thing was just stupid.

Welcome back Adam enjoyed that FOTD. (And hopefully many more). Like chimpinfinity said any idea if this set is UK bound?

I was happy to read about this figure before actually getting one while I was on vacation in Asheville, NC last week. I think I had it in my hands at the time, but didn't open it up until I got home.

Yeah, I wasn't thrilled that they used this particular sculpt, but I was surprised to see that there were two little gold rank dots on TK-421's chest armour in addition to the aforementioned belt/comlink change.

As a part of this set, it's pretty nifty. Thanks for posting the FOTD overview!