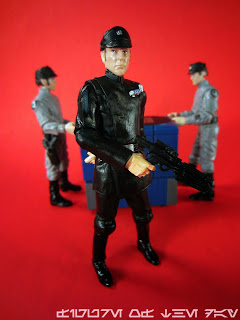 Commentary: These packs are a mixed bag - we got a Stormtrooper with a new belt, a scanning guy with a new head, and even the Imperial Officer is pretty newfangled and wonderful.  Sort of.  While it reuses the Captain Needa body, it also reuses his hands - his gloved hands - which are repainted in flesh somewhat sloppily.   After you collect a few thousand figures, you'll notice that hands that are painted (and are not gloves) tend to look wonky - were they molded in flesh, they'd look better.  As it is, they're on the low end of acceptable.

A few years ago, Hasbro revealed Captain Needa as the template of upcoming Imperials - the removable rank pin would allow for them to deploy this body for numerous new officers easily.  Well, we got a couple of figures using these body parts but certainly not many.  This nameless Imperial Officer is one of few, along with Baron Fel, that made use of the pretty good tooling.  The head sculpt is very nice, but it could be anybody - for all I know this is a guy at Hasbro as it's certainly not Commander Praji.  With four blue rank bars, I have no idea what the rank is - or who this should be - but I like it.  It looks good, and his hat comes off.  Other than the vague identity, slightly askew eyebrows are my only other complaint.  Since the figures are sold in a closed box, I have no idea how common this "problem" is or if I just got one that's a wee bit off.  The neat thing, though, is that his eyes are looking slidewise which gives him a little more personality in the facial region.  Kudos.

Adam, this figure is supposed to represent Pol Tredium, who calls for TK-421 and gets clobbered by Chewie.

God, I love that every character to have appeared on-screen in the original Star Wars trilogy has been retrofitted with a name and extensive back story.

Poor Pol Treidum-- getting all clobber by Chewie in his special red command station!!! Glad he finally got some love in plastic form. I have him hanging out in the control room of my vintage Death Star, overlooking the captured Falcon, which sits next to it.

Is it me, or does this figure look too tall compared to the Imperial Scanning officers? Maybe it's just the pictures...

The main issue for me is the same issue I had with Needa - his pants. He should be wearing jodhpurs, but they reused the awful Death Star Trooper legs, which aren't wearing jodhpur-style pants.