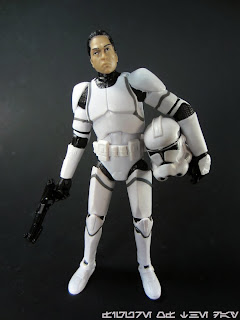 Bio: Under the command of Luminara Unduli and Commander Gree, this battle group specializes in grueling, week-long patrols which often require specialized armor customized for hostile environments. (Taken from the figure's cardback.)

Commentary: There are many legions of troopers, and the 41st Elite Corps Clone Trooper was one that never quite clicked with me.  Who?  Where were these?  They have grey stripes on their armpits and I'm supposed to care?  Eh.   Also, this figure shows that Hasbro has consistently found new and interesting ways to redo figures that didn't need redoing incorrectly, which is, to be blunt, not cool.  I mean, I've got a squad of these guys - we've had a few different molds with this deco on it - how is it now that Hasbro neglects to paint the soles of the boots?  The grey shins?  The grey belt?  And aren't there little squares on his forearms?  I'm quite forgiving when Hasbro has to make a figure for the first time, or is doing so from early, possibly unfinished reference that comes from a movie that isn't already on DVD and may change before it hits theatres.  So here, we have two options.  Either I'm a picky idiot, or Hasbro has gotten consistently lazy on clones since 2012.  (It's the second one.  I checked.)

The figure has only the short blaster - not the long rifle that previous, cheaper versions of this mold enjoyed as a bonus - and retains the same slightly awkward helmet.  The body sculpt is good - the skinnier body with bend-and-swivel wrists plus lateral hip movement is a winner - but I'm frankly sick of inferior, incorrect deco.   I can live with no battle damage as a cost-cutting measure, but getting a figure wrong that has been right before in all previous releases is increasingly inexcusable.  The same thing happened when Hasbro deployed this Clone body for the 501st Trooper last year.  What gives?  You got it more or less right in 2008, why are we having this conversation now?

With no tooled parts and fewer accessories than previous releases of this mold and of this legion of trooper, this is a dud.  It's a nice dud, requested by no fan - if it were the first release or if I had no reference to the movie, I would say it's a nice figure in its own right.  If Hasbro just claimed this was an all-new legion (40th Elite Corps?) I'd say OK, this is cool, go ahead and buy it.  The Clone head underneath is nice and the paint is clean, but it is simply not acceptable to get this lazy when making these figures, particularly given how this wave of 6 new figures only has 3 new molds in it, and how Hasbro has been spared the taxing work of having to research a never-before-made character.  They've done it right before, and they've previously done a good job.  As such, just hug your existing grey 41st Elite Corps figures a little tighter tonight and be glad that you made the right, cheaper purchasing decision when you bought them the first couple of times.   Just pretend it's an Expanded Universe figure and you'll like this 2013 model just fine.

Collector's Notes: I haven't seen this in a store yet.  I got this figure online from Entertainment Earth, and so should you unless you feel like skipping it.  No one would blame you.  I feel like this is less of a review than it is an elementary school teacher during a parent-teacher conference bellowing about how little Tommy isn't living up to his potential.  Hasbro has made thousands of top-notch (and some average) figures over the past decades, there's really no reason that this figure is missing key paint apps like the shins and belts.  I can live without the shoe soles, nobody would ever notice.  But c'mon!  With price increases, rotten packaging, and a decreased piece count - and the continued indignity of the lesser bucket on their head - can't we at least get the paint job done right?   Who am I supposed to hit with the rolled-up newspaper and say "NO!" to?

Email ThisBlogThis!Share to TwitterShare to FacebookShare to Pinterest
Labels: Clone Trooper, Revenge of the Sith, The Black Series