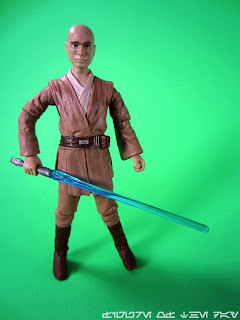 Commentary: Speaking of Jedi, here's one I didn't even know the name of until the figure came out.   Sephjet Josall is part of an amazing initiative by Hasbro to reuse old tooling to give us new figures, which as a toy industry person I find incredibly clever.  As a collector, I'm sooooo sick of the Battle of Geonosis, Human Jedi, and overpriced gift sets.   This is a nice but ultimately optional purchase.

Sephjet, aside from having a terrible name, reuses some elements of the Evolutions Luke Skywalker body.  The torso, arms, and legs are carried forward with an all-new lower robe piece (as far as I can tell) plus an all-new bald human head.  Courtesy of his obscurity, the figure looks great - if you compare it to stills from the movie, his eyebrows could be darker, and he needs traces of a shaved head, rather than a bald head.  The sculpt is still good, with 14 points of articulation and shows that Hasbro is getting better and better at wisely reusing its vast Jedi tooling library while understanding how adding one tiny new piece of costuming - that lower robe piece - makes a world of difference in changing this from Luke's body to Sephjet's body.   I have zero attachment to the character (played by film editor Joseph Jett Sally, hence the name) but I'm tickled by the good work Hasbro did and I'm always delighted when we get a new figure based on someone who actually works behind-the-scenes on the movies.  It's expensive, but you've paid more for less - get it if you can, especially on a sale.

It's to accompany the TRU exclusive Republic Gunship