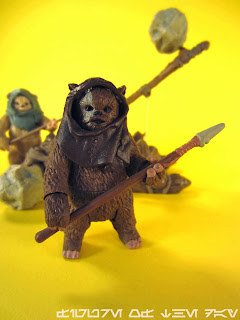 Commentary: Part of the fun of collecting for so long is that every few years, Hasbro actually gives me everything I want.  And then some.  As Ewoks go, at this point, all I ever really nag anyone for are more TV-based furballs, like Chukha-Trok or a version of Kaink that doesn't suck.   As such, Hasbro delights me by giving me new figures that didn't even have names before, and with figures like Chubbray I have to take their word that he appeared in the movie.  I really don't know - I realize this is a tough thing to read, but it's tough to admit too.  I loves me some Ewoks, but I don't know this guy.   Wookieepedia's page is pretty bare-bones so my guess is this went up as soon as the name got out because, most likely, Lucasfilm just named this guy in the last year.

As far as I can tell, the headdress is Kneesaa's, the body was originally used for Graak, and the head is seemingly new.  Chubbray has closed lips with what almost looks like lipstick, pointy ears, and no exposed teeth - this makes him (or possibly her) unusual.  The spear is the same that came with Romba back in 2007.  The white mask on the figure's eye looks cool, and it's a great reuse of new and old parts.  Honestly, Hasbro could have just repainted an old head and switched around various hoods and I wouldn't mind in the slightest.  There are nearly 30 Ewoks in the modern (1998-present) line, and I'd be fine if Hasbro wanted to make up their own mixing around their current elements.

Also, I should note that there's a new catapult included.  It's similar to the original, but better looking while functionally not quite as good.  Part of it might fall off when you launch, and the new boulders feel similar to the Star Wars Angry Birds figures.  The deco is solid, the sculpting is great, and for dioramas it's great.  You'll love it.  I don't think kids will love it, but are kids buying Ewoks today?  I'm curious.  I liked Ewoks when I was a kid, so I guess it isn't impossible.

I second the motion for Chukha Trok and a Kaink that doesn't suck.