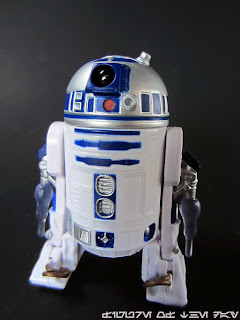 Bio: This brave, loyal droid accompanies Anakin Skywalker on missions that take them from Naboo to Geonosis.  (Taken from the figure's cardback.)

Commentary: When Hasbro announced the death of Droid Factory, the loss of this R2-D2 was something I considered to be part of the upside - fans were mourning the loss of two unimaginative, repetitive waves of action figures.  Naturally, Hasbro decided to salvage these and here they are.  Le sigh.  So R2-D2 here is the 2005 R4-G9 body with the light-up eye port painted over (that's good!) but is, at its heart, the 2007 30th Anniversary Collection R2-D2, minus the giant flame piece.   So it's a repaint, at a higher price, with less stuff in the box.

There's no dirt or damage deco. This is an existing $7 (2007 dollars) mold with out the coin or giant flame piece - hardly appropriate for a "premium" line and clearly a budget-saving move.  I wouldn't begrudge them a few of these if the actual, newly-tooled figures made it out in better numbers - molds are expensive, why not exploit them?  But I digress.  We're not here to complain about that, nor am I here to complain about this R2-D2's quality.  It really IS good, and any other year I'd be enthusiastic to see it show up in a Battle Pack or as part of an exclusive set as something newish enough to be worthwhile.  After seeing interesting figures shuffled off to de facto Euro exclusives, though, I am no longer feeling forgiving.

There are many R2-D2 molds to enjoy, and this Astromech body has been one of my favorites due to its universal use for so many robots.  It's a nice R2-D2 and the height feels right, regardless of what the truth is.  It also is the best version of R2-D2 with the booster rockets from the second prequel - 2003 and 2007 gave us versions of this figure that were insultingly awful.  This one is just unimaginative - there's nothing wrong with it, other than at this point in the line I think "boring" should be considered a sin.  We have precious few slots, and we've choked down a lot of bad decisions for figures - my heart breaks a little more each time we get a figure that a) isn't a repack and b) doesn't bring something new to the table.  It's better, I guess, sorta.  You can buy it if you want.  You won't feel like you got your money's worth unless you own zero R2-D2s, in which case this is actually a fun little figure in and of itself.  Just try to forget that you could get this mold (sans rockets) and 3 other wonderful figures in a Battle Pack for $20 just a couple of years ago, it'll go down easier.  And if you have the 2007 version of this mold, you're probably in good shape.

Collector's Notes: I am assuming that if this wave starts hitting en masse, R2-D2 will be the easiest way to realize that you missed the case.  I got this figure online from Entertainment Earth, and so should you.  I have not seen him in stores yet.  As R2-D2s go, it's definitely a good one, but timing is everything.   In a slow year like 2013 each release counts for a lot, and in the context of the first two waves of the struggling 3 3/4-inch The Black Series line, it seems easy to point to each and every figure selection in the line as part of collector-focused 3 3/4-inch figures epitaph in a few years.  After all, we're just a couple of months away from an R2-D2 + C-3PO 2-pack for the same price point.  Who wouldn't rather have that instead?

Email ThisBlogThis!Share to TwitterShare to FacebookShare to Pinterest
Labels: Astromech, Attack of the Clones, R2-D2, The Black Series