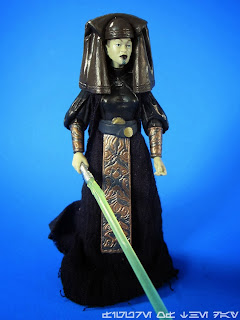 Bio: Luminara is a Jedi Master who commands the 41st Elite Corps as a Jedi General during the Clone Wars.  (Taken from the figure's cardback.)

Availability: Click here to buy her at Entertainment Earth now!

Commentary: One of the reasons I looked forward to ending this column was figures like Luminara Unduli which, while good, I fundamentally oppose to on the basis of I didn't need it and neither did you.  The character has a rich history of very interesting figures - in 2002, her $5 figure was an action figure-sized statue with gorgeous flowing robes and an action pose that has been rarely matched in this line.  It's a thing of beauty.  In 2005, we got a top-notch figure with tons of articulation and wonderful soft goods, and I considered that version one of the high points of Revenge of the Sith's movie year toys.  We even got a swell recolor of it for Order 66 - she made a nice Target exclusive.  And now? This is the one with the most bells and whistles, but the thing was I was never unsatisfied with the figures I have.  And now I have another one.  Why?  And why am I complaining?  It's a well-sculpted, nicely-engineered figure that is more in line with what collectors demand from Hasbro - and as such, offers few real surprises.  You more or less know what to expect here.

She now has a cloth "cape" that hangs off her back and gets in the way of her hat staying on straight.  Her dress reaches beyond her shoes, making it difficult to keep her standing without assistance.  She has no problems holding her lightsaber, and now finally has ball-jointed ankles, elbows, shoulders, and all those 14 joints you expect.   This puts her on the same level as recent Barriss Offee and Aayla Secura figures, but again, did we need an improved version of this character?  Hasbro's previous ones were great, and while I do love the quality of the paint job on her garments and the improved face sculpt - with a bun of hair under her hat, a nice touch - did I need it?  No.

If you don't have a Luminara, or you insist on only having the best, this is the figure for you.  The removable hat is a step backward in terms of toy-ness, but those of you who expect a high-end prop replica for ten bucks are going to love this one.  Given Hasbro's toy proclivities, this is likely to be as good as she'll get for years - of course, other than the elbows, I'd have said the same about the 2005 model.  A lightsaber hilt for her belt would be nice, but you can't have everything.

Collector's Notes: I haven't seen her in a store yet.  I got this figure online from Entertainment Earth, and so should you.  I have not seen him in stores yet.  As the movie-style character has been out of circulation, it's arguably a good release - the problem is as I get older, it feels like I just got this figure.  And the last new movie mold of her is now 8 years old - maybe I'm too old to be the right person to write these?   Newbies, you'll love it.  Old farts, you'll be left questioning your hobby.  And if you just plain don't collect prequel stuff, keep up the good work.

Email ThisBlogThis!Share to TwitterShare to FacebookShare to Pinterest
Labels: Attack of the Clones, Jedi Knights, Revenge of the Sith, The Black Series