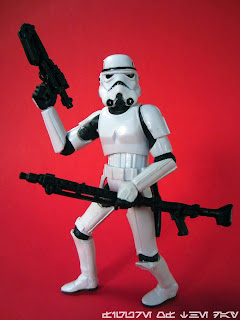 Bio: These elite soldiers enforce the Emperor's will across the Galactic Empire. (Taken from the figure's cardback.)

Commentary: I've written up thousands of figures and often worried that I came off as too positive in many of the reviews.  How about that!  This Stormtrooper is, like yesterday's clone, evidence of how Hasbro isn't giving this particular subline their all.  Or their factories, or Lucasfilm Licensing.   On paper it's decent - the 2011 The Vintage Collection Stormtrooper was similar and better, unquestionably, in all but one way.  The 2011 Trooper has a removable helmet with a Clone face, which some people don't like - but it had the great lateral hip movement, two nice guns, and a great paint job.

This figure has a helmet that's notable in that the mouth section is actually painted quite well, arguably better than any other Sandtrooper I've had in my hands in months.  The forehead stripe is painted sloppily, the lenses are painted a little off, as it seems to be a worse copy of the VC14 Sandtrooper with a Stormtrooper's belt.  The pauldron isn't here, the backpack isn't here, and the guns are different - but that's the same body configuration, just done with a reduced eye for detail.  The helmets of Stormtroopers and Sandtroopers - at least as toys - have been kinda different, so this is clearly not the same as other Stormtrooper figures.

The figure excels in only one place - accessories.  The "new" Stormtrooper pistol with the moving bits and pieces is included, as is a longer rifle.  Both are nice to have and would be welcome with any future Stormtrooper purchase.

Part of my big beef with The Black Series is that these are thinly veiled reruns, inferior copies of figures which are already in the marketplace and cheaper.   This figure is a fine example of that - I'd be happier with another run of the 2011 Vintage Stormtrooper, or even more of the Saga Legends guy that hasn't hit yet.  Normally troopers as filler in an assortment were welcome - but Hasbro has consistently proven a lack of imagination or a desire to really knock these out of the park with precious few exceptions.   It's figures like this that make me excited for more Saga Legends and 6-inch releases, and I can't help but think this is Hasbro weaning us off of this kind of a figure at this point.  I look forward to the 6-inch Stormtrooper in a few months.

Collector's Notes: I haven't seen this in a store yet.  I got this figure online from Entertainment Earth, and so can you were you so inclined.  It's not a bad figure in theory, but it's just so iffy that all I can say is that you can do better.