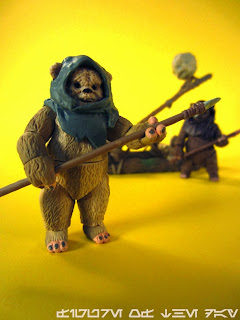 Commentary: Like Chubbray, I'm fairly positive Stemzee didn't really exist as a character until this exclusive set came to be.  I'm quite accepting of this - it's a remix of existing parts.  Nanta (Corpsey) donated his head and hood, with Wicket (2010) giving his spear and the body has been previously used on the likes of Logray (2011) and Teebo (2012). Add some new paint, and presto, you're done.

Hasbro made sure the molds could easily swap heads between bodies, which works well for customizers and for Hasbro.  This is the first time the Nanta head was used on the Logray body, and it fits perfectly.  The deco and light stripes look very Logray-ish, and the ball-jointed elbows with lateral-moving hips makes this a superior denizen of Endor's Bright Tree Village.   For a race fans supposedly hate, and a character no fan can claim to know, it's a nice figure.  The painted nails look great and the fur color just fits.   If you didn't have Nanta nearby, odds are you wouldn't even notice that it's a reuse of existing parts.

I like Stemzee, despite having zero emotional attachment to the character.  I do like Ewoks, though, and the set was more or less worth the asking price.  I hope Hasbro does another set like this next year, maybe with a mini Battle Wagon or some other bizarre extra piece of equipment.  Isn't it time we got a movie-style Baga?