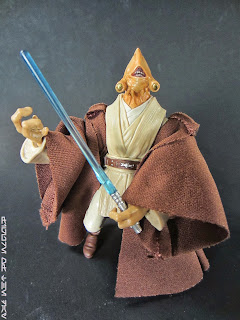 Bio: Pablo-Jill is an Ongree Jedi Knight who battles Separatist forces during the battle of Geonosis. (Taken from the figure's cardback.)

Commentary: This is a good one.  Over the years I've had less and less love in my heart for Jedi Knight figures, but I do enjoy seeing Pablo Jill return to stores.  Depending on where you lived, he was tough to find in 2005 and that figure had a few flaws like very limited articulation and a very snappable lightsaber.  This new version makes good on those problems, but trades in those oh-so-nice plastic sculpted robes which tend to look a lot better.  Cloth hangs funny at this scale, particularly on Jedi robes.  It's one area we've seen Hasbro toying with since the prequel trilogy started, but even 1999's plastic robes on Adi Gallia, Qui-Gon Jinn (Naboo), and Obi-Wan Kenobi (Naboo) tend to look better than their most recent experiments in cloth.  That's not meant as a knock at Hasbro's skill, it's just a limitation with working in this medium.

Once you disregard the bulky, awkward, ill-fitting cloth robes you'll find that Pablo-Jill is a fine example of how to make a figure if you don't need him to sit.  The rocker ankles are on par with the best I've seen on a Spider-Man figure, and the new ball-and-socket wrists give the figure a stunning range of movement while not hurting the aesthetics one bit.  I love the added range you get without increasing the piece count from a normal swivel wrist.  The "skirt" is bent out of shape rather oddly, but he still has his strange legs that an be posed to stand if you're willing to work with him a bit.  He has the fully-jointed hips, but they're strange - you can move them a bit in nearly every direction but you probably won't be able to ever get him in a decent "sitting" pose.  I'm sure customizers will dremel out part of the crotch to increase mobility here, but for the rest of us this is a standing-only figure that could probably benefit from a display stand.

Deco and sculpting is on par with Hasbro's current better new figures - Jedi robes are impossible to screw up, so all I can do here is nitpick at a hold in his belt for a lightsaber hilt that isn't included.  (For shame.)  The hands look great, with four digits each, and the head is dynamite with exquisite detailing bringing out the detail in each individual tooth.  At this scale, this is pretty uncommon to see and difficult to pull off well.  I assume in terms of deco, this figure will be appearing at or near the top of everybody's "Best of 2013" lists.

Hasbro really put their best foot forward with this figure, showing us everything they can do with a 3 3/4-inch Jedi Knight figure.   It is absolutely worth your while to track down just to see how the engineering works, and it doesn't hurt that it's a well-sculpted character that has been historically difficult to find.   I don't like the cloth robes, but I can also ignore those and still enjoy everything that's left.  Get one.

Collector's Notes: I haven't seen this in a store yet.  I got this figure online from Entertainment Earth, and so should you were you so inclined.  The figure is a huge, huge improvement over his 2005 ancestor.

Email ThisBlogThis!Share to TwitterShare to FacebookShare to Pinterest
Labels: Attack of the Clones, Jedi Knights, The Black Series