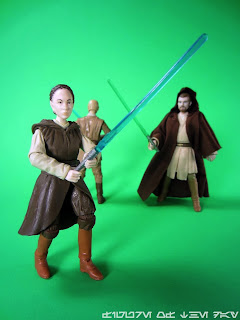 Commentary: At first glance, I would say Sarissa Jeng looks like they stuck a lady head on Ki-Adi-Mundi's body.   It turns out there are lots of new parts here, but the legs are dated from a few years ago as they belong to Stass Allie and Jaina Solo.   I'm not so sure about the arms, but the rest of the costume appears to be new.   Due to deco problems, this may be the weakest of this figure set - her hairline is a little off on all the samples I saw, with the added problems of a large forehead that looks (again) like fivehead due to the fact it's probably a fraction of a micron back on the head.  At this scale, every teeny tiny millimeter counts.  Her face is very thin and angular, and her eyebrows are small.  This gives her a more alien appearance, which is unfortunate as reference photos of the actress put her on the happy side of cute.  She deserved better.

Articulation is the standard 14 points you've come to expect, with no special bend-and-swivel or anything like that.  Posing her is a breeze, but she won't sit.  It's a wonderful figure for dioramas given her unique hair and outfit, but I think they could have done a much better job on the head.  After all, the dress is really nice with subtle fabric folds and a sculpted plastic hood hanging down off the back.  I'm so happy Hasbro opted to make it plastic rather than cloth, as cloth robes tend to look a little worse at this scale.   At the right price this is a can't-miss figure as she's mostly new parts, but at the same time a customizer may want to touch up her head paint a bit.   If Hasbro ever reissues her - and I hope they consider it someday - I'd be eager to see what she looks like with better hair and face paint.  I bet awesome.  As it is, she's perfectly acceptable though.