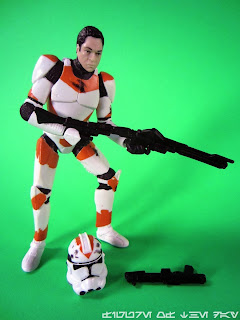 Bio:  Clone Troopers in the 212th Attack Battalion fight in the Battle of Utapau.   Distinguished by their orange-marked armor, 212th Clone Troopers are under the command of Jedi General Ob-Wan Kenobi and Clone Commander Cody.   They accompany Kenobi to Utapau on a mission to eliminate General Grievous.  (Taken from the figure's cardback.)

Commentary: I goofed!  Reader Paul Harrison of the Jedi Temple Archives pointed out that I have a terrible memory - because I feel shame, I'm leaving my original, wildly incorrect FOTD commentary below.  The 2011 Utapau Orange Clone Trooper was based on the body seen on figures like the Gelagrub Patrol Clone Trooper and VC15 Clone Trooper (2010).  As such, this 212th Battalion Clone Trooper figure has merit - to an extent.  If you picked up the Vintage-carded 501st Clone Trooper or the VC45 Attack of the Clones clone trooper, this figure shares the same bend-and-swivel wrists plus the thinner build.  This, kids, is why you always check your reference library before writing a column at 2 in the morning.

For this reason, the new orange Clone has more than a little merit - on the plus side, the newer, thinner build looks better.  On the minus side, the helmet deco is still not quite right and the helmet itself feels a smidgen too large.  His guns are the delightful new Vintage variety - smaller, thinner, and painted.  Troop building will sadly not be possible but then again, it's not like we don't already have a bunch of different strains of the chunkier, orange Utapau troopers anyway between exclusives, comic packs, and other releases.  So this one is new deco and kinda cool - if you're the kind of person who wants but one clone, only the best of each squad, this may be the one for you.  If you're a troop builder, well, uh, move along.  Nothing to see here but your tears.

The unedited old version, or yet another scarlet A: I assume your reaction to the 212th Battalion Clone Trooper was similar to mine - "don't I already have enough of these?"  While most figures in this wave differ from other recent releases significantly, this one... well... not so much.  In 2012, we got a Vintage Collection Utapau Clone with the same exact mold.  It's the "Vintage" body, with bend-and-swivel wrists plus ball-jointed hips.  The oversized helmet remains, but the deco is a little bit different.  It's more than a little surprising to see this squad again so soon, particularly since the layman will never realize it's different.   It's figures like this that, at least for 2013, make me wonder how much oversight there is at Hasbro.  (I'm convinced Lucasfilm is fine with anything.)  Aside from the TC-70 arm, there is nothing that makes this guy stand out to an average fan - it really is just different enough to make you mad.

The figure is a smidgen different from the 2012 figure, most obviously in the helmet and damage.  The 2012 figure has slightly more accurate helmet detailing as orange placement goes, but this 2013 release has some pretty spiffy battle damage.  The 2013 figure is much, much paler - leave the helmet on, he looks like he has the flu.  The orange around the upper thighs is more true to the movie, and overall the orange looks more damaged and worn.  The guns are slightly different from 2012, different tooling you'll recognize from figures like the 2013 Clone Pilot (in the case of the smaller rifle).  Both are unpainted, and the end result is a figure that's arguably superior to the last release.  However, we've had several flavors of orange since 2006 and they don't tend to match, so building a matching squad at this point is basically a fool's game unless you shop online or are an executive for a New England-based toy company.  Me, I live in a basement, so I'll add one more Utapau Trooper to my growing, increasingly mismatched squad.  They'll get along just fine.