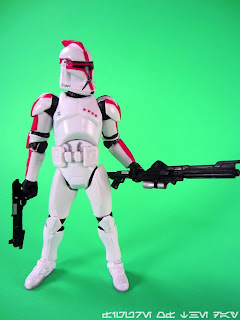 Commentary: If you were around in 2002, you'll remember we got a red Clone Trooper Captain figure.  We did not get Clone Captain Deviss  because the clones didn't start getting names until 2003, where a few were identified as part of the then-new Clone Wars multimedia marketing malaise.   Deviss existed as a figure in 2005, but the design was excised from the movie so it's not like anybody knew who he was.  He did get a few toys made of him, though, so he's almost an official movie character from Revenge of the Sith. (This started off as a design for Bly.) The whole named clone thing from Attack of the Clones is rather new.

The figure itself is a retread.  The body is a 2003 Clone Wars super articulated trooper with red rank markings.  The shoulder rings are sadly white, while previous carded releases of Clone Captains often had them as red.   The red is darker and a little thicker, but a few spots of white peek through.   He has 14 points of articulation and, surprisingly, painted off-white soles on his boots.   His weapons are similar to those packed with many Vintage clone figures, and are generally smaller and exhibit some silver paint applications.  They're nice.

I wouldn't suggest any long-haul collector run out to get this set for this figure, but it is different enough so that you can identify him easily against your other red Clones.   I'm in no way excited to own this one, but well, there's one more in the pile, I guess, and I can flush a few more dollars down the collection toilet.   If you never received a red Clone Captain, do make sure you get this one.  I like his guns better, but the shoulder issue is tough to get over.

Column Notes: Time to go on break again! I'll be back when something new shows up.  See you next mission!