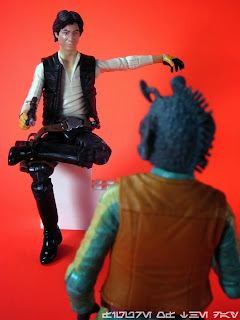 Bio: Han Solo has a final showdown with the bounty hunter Greedo in the Mos Eisley Cantina.  (Taken from the figure's cardback.)


Commentary: I like the 6-inch figure concept a bunch but the execution is tantalizingly close to perfect - with some amateur mistakes.  Han Solo has an amazing body sculpt, easily the best accessory compliment of any Hasbro figure I remember buying, top-notch articulation, but two bizarre problems.  One, the Stormtrooper belt has this weird peg sticking out of the front which is purely cosmetic - it matches another tab on the Sandtrooper, which also seems to serve no real purpose.  Why?  The other problem is Han Solo's head, which has blue eyes and looks little like Harrison Ford but a lot like Han Solo, if you follow me.  Could they not get a likeness approval?  This is just odd, and over the last couple of decades of Kenner and Hasbro product no longer seems like a quality or skill level and now feels increasingly like a conscious choice.  At certain angles he looks perfectly fine, or at least acceptable, but where's Ford's scar? Why are his eyes the wrong color?  And why is the head set so high on the neck?  It's soooo close to perfect that I assume it's going to inspire fans to mold and make their own Han heads to sell at a premium, because other than the head this is easily the best Han Solo action figure I've ever owned.  Hasbro, if you rerelease it with a new head, I'd buy it again. 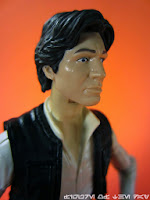 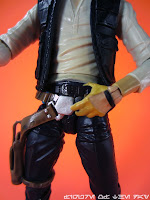 The sculpting and articulation prove that you are a chump for owning dozens of 3 3/4-inch figures with varying levels of improvements.  Han can stand, no problem.  He's a hair over 6-inches tall, which matches up nicely with the 6 foot, 1 inch actor.  The wrinkles on his outfit seem about right, and you get the blue pants and red Corellian Bloodstripes and all of that.  The real surprise other than the optional belts - both of which have functioning holsters for their respective blasters - was that the figure would have "gloved" hands you can swap out that aren't posed the same as the regular hands.  The left hand is designed to reach out and fidget with something, or perhaps fondle something.  They look great and help add to the figure's personality, which is ample.  His vest is removable, too, and you can have him sit cross-legged on a 1:10 scale bar section if you have such a thing at your disposal.  I don't, but get on that Shapeways people. 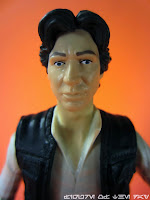 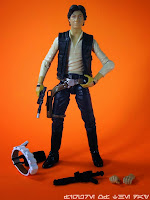 Swapping belts is relatively painless, and the hands pop out fairly easily but not too easily.  Other than the lackluster head (and its questionable eyes), this figure is a marvel and is easily one of Hasbro's finer efforts in terms of execution this year.  Get one. 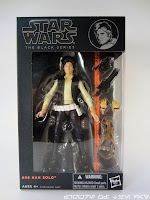 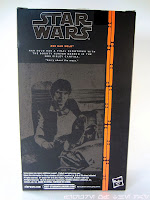 Collector's Notes: I haven't seen him in a store yet.  I got this figure online from Entertainment Earth, and so should you.  (The wave is $79.99 with free shipping, you cannot beat it.  If you wait to see it at Target you'll still have to pay sales tax, so just buy the wave of four.)  I appreciate how the wave is really built around Han - his girlfriend, and two people that want him dead.

i agree on Han's head. i think there trying to put to much "character" into his head and at this scale it comes off as more of a caricature then a decent likeness. he looks more like Bea Arthur than Han Solo. the old potf2 Han Solo headsculpts capture Harrison Ford likeness better.