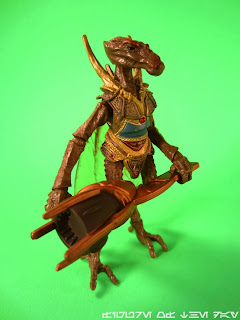 Bio: In Star Wars: Attack of the Clones, Sun Fac sentences Anakin Skywalker and Padme Amidala to be executed in the Geonosian arena after conficting them of espionage.  The ruthless Sun Fac is chief lieutenant to Archduke Poggle the Lesser, and runs the Geonosian Droid Factories with a cold and brutal efficiency.   (Taken from the figure's cardback.)

Commentary: I'll take "Updates Nobody Asked For" for $100, Alex.   Sun Fac was close to being useful - Hasbro could have tweaked the deco some more and just released him as a generic Geonosian Trooper, thus making him worth army building and giving this set a reason to be bought in bulk.  Back in 2010 Hasbro did use this mold for a generic Trooper as part of Target's exclusive Geonosis Arena packs, which benefitted from retooled legs with an added knee joint.  This figure is based on that configuration, with new deco over the kneeless 2006 version which you no doubt have bought by now.

In terms of articulation, this version wins.  In terms of accuracy, Hasbro had it right in 2006.  Sun Fac 2013 lacks the scar on his face, and parts of the loincloth armor seem to be colored less consistently with the digital models from the movie.  The 2006 version had detail that "popped" better, particularly in the red/silver around the waist, and had some exaggerated red in his skin which, I think, better captured the spirit of the movie design.   The lack of the eye scar is somewhat baffling, but Hasbro has made a surprising number of figures that took a step back over the years - which is to say, any.  I'm lazy, I'd just reissue the guy with no changes.

It's different enough to be notable, and there's no doubt why Hasbro decided to push this wave away from retail.  I feel they should have gone the extra mile and just dumped it completely, it's fine for people who haven't gotten Fac-ed yet but anyone with the 2006 version - which also includes a display base and a secondary pole weapon - will see Sun Fac 2013 as a waste of plastic and resources.   Of course, what we all really want is that TC-70 arm so suck it up, people.