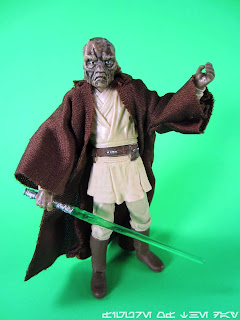 Commentary: This is a fun one to nitpick. Que-Mars Redath is a figure that does originate from the films, but is an obscure, background character.  How obscure?  It took a while for him to have a name, and according to most sources Hasbro got it wrong - it should've been labeled "Que-Mars Redath-Gom."  I'm not picking on Hasbro, I didn't know what his name was, either.  The figure is an odd mix of parts and you can se an error on this one - his right hand is significantly bigger than his left.  (Insert joke about handling his lightsaber here.)  The issue is that another figure in this set - Khaat Qiyn - seemingly had her hands swapped with him. They're painted to match the figure, but the molds are backwards.  It's an unusual error, to say the least, and I dare say unprecedented in the thousands of figures we've looked at together over the years.  The smaller hand originally came with Stass Allie, and the figure's body was originally Tarados Gon (Klatooinian Jedi Knight).  The head is, as far as I can tell, new - and he's not even the first Weequay Jedi.  We've also had Sora Bulq and Master Sev.

With 14 points of articulation, Que-Mars is fairly typical for a Jedi figure with the full range of movement you've come to expect from these figures.  It doesn't go above and beyond in any way, but it does look pretty good other than the head being seated a little low on the neck.  The head itself is well-sculpted and exceptionally decorated, with lots of warty detail and a nice paint job to bring out the winkles and creases.   The eyes are big and expressive, while in the movie they were two black voids.  I prefer Hasbro's take in this respect.  His lightsaber blade is green in the source material, so score one for Hasbro there.

With the tiny lady hand and the wrong name, this figure would probably be the subject of fan ire in another year, but 2013 seems to be the year everybody throws their hands up in the air, perhaps because they just don't care.  The set is not selling terribly quickly and as it has multiple new characters I would suggest getting it if you collect Jedi or have a prequel focus.  Everybody else, well, get it if you like it.