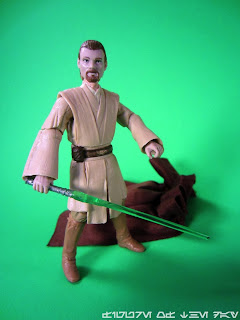 Commentary: The only name I recognized from this set, Roan Shryne is an Expanded Universe character that survived the first part of the Jedi purge, but didn't quite make it.  The character didn't exist during the Battle of Geonsis, but retconning is popular these days so now he was there the whole time.  As far as I know his only real "appearance" is based on a Star Wars Insider article, and most information indicates he should have a blue - not green - lightsaber.  He looks like the guy in the picture, though, with his beard and light brownish, red-tinged hair.  So basically, you've got another Expanded Universe figure.  Surprise!

The figure itself reuses the 2007 Mace Windu body which has completely restricted hip articulation due to a "shell" created by the lower Jedi robes.  He has the same arms and hands as Mace, but as far as I can tell the boots have been retooled from Mace's distinctive footwear which gives the figure more of a unique look.   You've got the same 14 points of articulation that you're used to, and the cloth robes - while generally awful - look OK here as the smaller hood is less awkward and preposterous than most others.  It's still a little sloppy, but at least it isn't terrible.  I like this figure, despite being something of a weird quasi-movie release.  It's good enough to add to your collection of shruggable human Jedi, but I assume fans of the novels are going to be delighted with him.  Except for the lightsaber.  Otherwise, hey, one more EU figure!