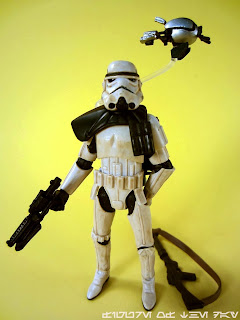 Bio: Sandtroopers hunt for two Droids on Tatooine.  Wearing armor modified for harsh desert climates, Sandtroopers search the town of Mos Eisley for R2-D2 and C-3PO.  A Sandtrooper questions "Ben" Kenobi, who uses a Jedi mind trick to make the Sandtrooper agree that "these are not the droids you're looking for."  (Taken from the figure's cardback.)

Commentary: Up until about 2008 I was elated each time Hasbro put out a new sorta-different Sandtrooper figure, because the prices were good and the deco was usually quite different.  There were also multiple sculpts and tons of accessories, so it was a scavenger hunt of sorts.   This version is less exciting - it's good, but it's very similar to the 2012 Vintage release (orange pauldron) except they left off the one orange paint app.  Other than that it's functionally identical, with very similar dirt paint (which is excellent), the same three-piece Stormtrooper blaster, a large grenade cannon, and of course the same backpack with clip-on Face Droid from Star Wars: Special Edition.  I'm glad Hasbro was generous with the accessories, but the fact that nothing really changed except one single paint application (and the packaging) irks me a bit.  One different accessory - even the removal of one accessory - would make me think they at least pretended to do a little more work on this guy... of course, that's kind of the theme of this whole wave.  When Hasbro announced they axed the Droid Factory waves, other than the droids themselves I thought that was kind of for the best.

The body is the same as the Dewback Sandtrooper, and pretty much all subsequent Sandtroopers in the Vintage 2010-2012 era.  The helmets of this and the 2012 one are supposedly different, but it's similar enough to me where I'll just say "sure" and move on - it's not significantly interestingly different enough where I can point to what's unique.  Maybe the mouth?  I don't know.  I love the paint job on the body, which is again fundamentally similar to that 2012 Vintage Sandtrooper.  The articulation is about as good as we're going to get at this scale until Hasbro caves in and gives us a 100% new sculpt, and I'm less and less optimistic about this.

If you're a collector, you want this - it's different enough to make you mad.   If you're an army builder, you'll want this - same reason.  If you're looking for the best examples of each trooper or character, and you have the 2012 Vintage release, you can skip this one - it's basically the same, minus the color of the shoulder pad and the droid part.  Oh - it comes with the head of TC-70, Jabba's protocol droid from The Clone Wars movie.  Well, I take back everything - now it's a must buy.  (I loves me some Droids, and Clone Wars, and Jabba.)  The set itself is far more interesting than any of the six figures inside, save for Dooku's pilot droid.