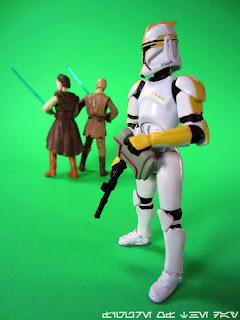 Commentary: Wait, what?  Since when did Clone Troopers have names at the Battle of Geonosis?  Apparently since Hasbro decided Clone Commander Ponds was present, and as someone who was a fan of the movies when they came out I can safely tell you none of the Clones had names or numbers for quite some time.   If your collection is based on names and characters, Ponds is a significant new release that's worthy of adding to your growing cast of characters.  If you just want new figures, you'll immediately recognize this as the same yellow Clone Commander we got in the Entertainment Earth clone packs of 2005, the Saga Legends repacks of 2007-2009, and probably some other release I'm forgetting right now.   The key difference here is the shoulder rings are now white and not yellow (and therefore look worse), the yellow paint is darker (and therefore looks better), and you get the "vintage" Clone Blaster along with binoculars as accessories.   So it's sort of better than the original release.

Unfortunately Hasbro has taken great glee in defacing its figures in recent years, with painted date stamps or SKUs on some and others, like poor Ponds here, have disgusting plastic carvings in the back of his leg defacing the sculpt.  It's bad enough we couldn't get a yellow-striped version of the Vintage clone body, which would have been awesome, but Hasbro has to deface it too?  This is just inexcusable - Hasbro, put it on the sole of the foot.  Or better yet, don't include it at all.   What does it matter to me, the customer, that this figure was probably spit out of a factory on August 30, 2013?  Why ugly up the figure to share this information?  Can't you just embed it in a tiny QR code on his feet, like Angry Birds Telepods?   Or not include it at all, like, oh I dunno, most figures made by anyone ever?

I appreciate the name being added, the new accessories, and the acceptable deco - but the carved numbers and the shoulder rings?  Hasbro, you can do better than this, especially if we're going to be charged premium pricing for our figures.  They should be great - not merely "different."