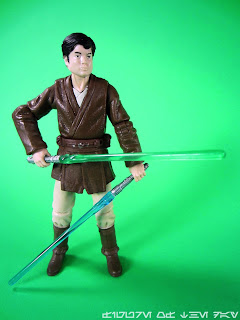 Commentary: The funny thing about Selig Kenjenn is that despite being effectively named for this set, he's less obscure than the other two Jedi in the package.   At no time was this character associated with the Battle of Geonosis, but it's a heck of a toy tuckerism.  The head (new sculpt) is based on Leland Chee, keeper of Lucasfilm's Holocron database for continuity.  The only illustration of the character was seen fighting Stormtroopers with a background packed with TIE Fighters, so I'll leave it up to him to decide how he fits in to the whole sort of general mish mash.  As such, you can place this figure just about anywhere and not be wrong.

I am not sure where his hands come from, but the head is new, the "skirt" is new, and the body was previously a Nikto Jedi from 2010 named Fi-Ek Sirch.  Other than the legacy neck being somewhat thick, the figure actually looks pretty good for an alien adapted into a human.  He has little difficulty holding his lightsabers, and the 14 joints are what you've come to expect.  The outfit is surprisingly well-textured, and there's even a place to plug a lightsaber hilt.  One is not included, but if you find a spare, you know where to stick it.  Due to the behind-the-scenes-ness of the figure, I like it and would suggest you track it down.  I love Hasbro's creations based on real-world people, mostly because the story behind it is far more interesting than "this was another unnamed extra."  Grab him if you can, he's probably the most interesting part of this set.