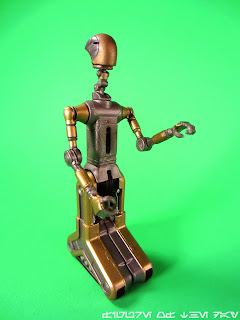 Bio: FA-4 is Count Dooku's Pilot Droid on board the count's solar sailer, an interstellar sloop and a gift to Dooku from the Geonosians.  When Dooku makes his escape from Geonosis after battling Anakin Skywalker, Obi-Wan Kenobi, and Yoda, it is the Pilot Droid FA-4 who operates the controls of Dooku's interstellar ship. (Taken from the figure's cardback.)

Commentary: Originally FA-4 was to be doled out in segments as a build-a-droid figure, instead Hasbro just carded him as part of this special set.  I'm OK with that - it's a very nice figure.  Given 8 points of articulation, the figure moves better than I'd have guessed with joints at the hips, elbows, shoulders, and two neck joints.  You can pop off the arms, legs, and head and swap them with parts of other build-a-droid Protocol Droid bodies if you want, and the Pilot Droid arms do look quite nice in that style of body.

There are precious few 100%-newly-sculpted figures in the line this year, and I believe this may be the first completely new character to be released on a single blister card this year.   Thankfully it looks good - the squat little guy comes up to a Stormtrooper's shoulder, with a bronzey paint and a few painted details.  Eyes, some light silver, and a bit of black bring this silvery-grey robot to life.   Were this figure sold in stores, I'd want more of them because the various parts and pieces really are fun to swap with the other build-a-droid bits.  The figure has more moving parts than I'd expect and looks like it would fit perfectly in the Solar Sailer vehicle... that will never, ever be made.

You won't find a lot of excessive detail here, but as the only genuinely new figure in the wave it's the reason you will want to buy this set.  I almost bought one off of eBay until the flood of them made me think better of it, and I'm glad I waited.  $30 is too high for this figure - as is $60 - but the entire set is arguably "worth" it.   Barely.   It's still an expensive and decreasingly rewarding time to be an action figure collector.