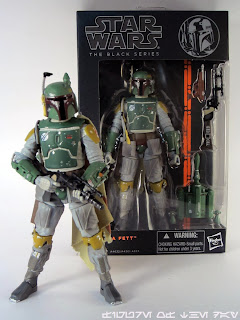 Bio: The notorious bounty hunter Boba Fett prepares to deliver the carbonite-frozen Han Solo to Jabba the Hutt.  (Taken from the figure's cardback.)

Commentary: I know, you already have Boba Fett.  But if you don't, good news - the basic retail release for $20 is fundamentally identical to the $60 Comic-Con version,  minus the carbonite block, which no sane person would agree is worth an added $40.   The entire package is arguably worthwhile, and Boba Fett himself is a bargain at $20 - so good on you for waiting, just get this one.  The sculpt is quite excellent, and I expect there will be debate on the coloration of his bodysuit and armor.  Should the suit be blue?  It looks grey usually, so there are often discussions over who to trust - reality, or your own eyes?   I know the figure isn't necessarily correct, but it does look like a lot of stills from the movie - I never mentally registered the costume in the film as blue, even though the original 1979 action figure is that color.   So aesthetically it's a winner, even if it's sort of wrong in terms of authenticity.  But hey, look on the bright side - Hasbro's going to give this mold a few spins at retail, most likely, so at least there's a valid reason for another release down the road.

The figure itself is, as the others, tantalizingly close to perfect - sure, we can quibble over the deco, but it meets my needs as good enough.  The thing that surprised me was that the rangefinder on his helmet wasn't articulated - even 3 3/4-inch figures have had that feature on and off since 2001.  It's a little bent out of shape, but generally it's good enough, and the sculpting work is pleasant enough to make me happy I own it.  If Japan had a Figma figure this good and it were $60, authenticity be damned, people would be falling over themselves to purchase it.  For this reason, I can't fault a figure that's really quite good, and even has a decent cloth cape on him. 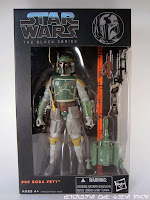 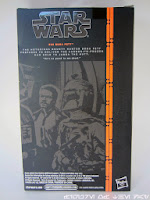 The guns basically work - his arm articulation is slightly restricted, but the costume does not beget hyper-articulation at smaller sizes.  You can put all of the joints you want on a figure, but sometimes things will bump into the articulation, like Boba's hip pouches or the cuts on his elbows.  You're going to love posing him with his gear, and while the figure is unquestionably superior to and more fun than the gamut of 3 3/4-inch figures (save for 1979) there will pretty much always be limited room for improvement.  Hasbro did a fine job hiding most of the joints within the confines of the costume, and I found myself taking note of numerous features on the bounty hunter I generally didn't think were even there.  It's a winner.  Complain all you like, but this is still a top-notch figure and it's not like anything you can buy is perfect anyway.  Except the 1979 figure, because it is, and shut your pie hole if you think otherwise.

Collector's Notes: I haven't seen him in a store yet.  I got this figure online from Entertainment Earth, and so should you.  Even though it's the same as the one from Comic-Con with fewer accessories, it's also significantly cheaper.  So if the carbonite doesn't matter, get this one.

Wouldn't it be glorious to see this fig re-painted in 1979 colours with the red and yellow wristamacallits? Oh well, a fanboy can dream!