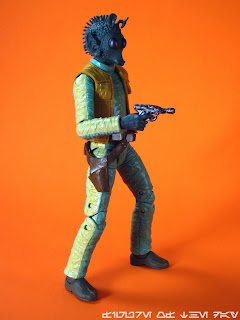 Bio: Han Solo has a final showdown with the bounty hunter Greedo in the Mos Eisley Cantina.  (Taken from the figure's cardback.)

Commentary: I got to fondle the prototype for Greedo at Comic-Con this year since we got to reveal this figure at work, so that was awesome.  It had a strong paint smell, and so does the final release - which, I have to say, is largely excellent.   My favorite Greedo toy may still be that 1990s 12-inch Collector Series release by Kenner, but this one is right up there - it's also the first new mold Hasbro Greedo to include a vest this century.  It comes painfully close to being the last Greedo Hasbro will ever need to make, save for one detail - the eyes.  With Greedo I generally expect the manufacturer of any Greedo item to get the eye color wrong.   It's basically metallic purple, which is as close as we're likely to see in this decade of toy production*, but the shape is wrong for this release - they're basically eggs or ovals, rather than circles, which they have been in every toy since the first one.   Every other nitpick I could make is me nitpicking, but the eye shape is just weird looking.  The ears are great, the warty head is fine, the suction cup fingers are perfect, there's really a ton to love about this figure.  Pointy ears?  Yes.  Perfect sneering snout?  Oh yeah.  But the eyes, howl! The eyes! 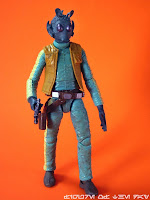 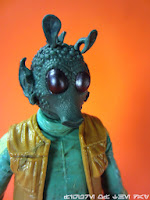 Other than that, the head is great.  I love the little protrusions, the mohawk is a separate strip of rubbery plastic which was glued to the back of his skull.  His giant ears really stand out, achieving Kenner's and Hasbro's ongoing high-quality Greedo head sculpts.   I'd say it's one that's difficult to screw up, but... well... eyes. 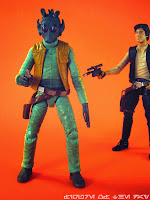 Greedo's suit has been interpreted numerous ways and this is a pretty good synthesis of previous versions - his shoes here are grey, Gentle Giant's last statue was a lighter yellowish brown, which is close to the stripes on his track suit.  Sideshow's figure looked like it had boots, or hi-tops at least.  This Greedo seems more consistent with Hasbro's recent interpretations with the darker grey footwear, and the suit is generally colored as you would expect - but for some reason has been slathered with a dirty wipe.  He doesn't look dirty in any of the behind-the-scenes shots and the wipe or wash or whatever it is feels like overkill.  You want to see the detail, sure, but it looks like someone dumped a bucket of sewage over the poor guy when what you may have wanted was a more pearlescent sheen.  In most display environments you won't notice, because you'll be too distracted of how the yellow stripes are this great sickly color which almost lets the green show through - just like the suit in the movie.   On, and the quantity of wrinkles and folds you'll find sculpted here are obscene.  I'm not sure how the artisans at Hasbro or Gentle Giant handled it but I assume that if they were hand-sculpted, someone is gonna have some nasty carpal tunnel.  It's remarkable.

Articulation is on par with the entire line minus the Sandtrooper, which is a little bit better.   The arms are basically on the level of the best 3 3/4-inch guys with bend-and-swivel wrists, plus long, rubbery, individual fingers with suction cups.  His trigger finger fits right in the trigger, painlessly.  For me. Heck if I know how the figure feels.  Depending on how you wish to count, you've got a solid 20-24 joints to futz with.  The neck has two joints, allowing him a more than decent range of movement. 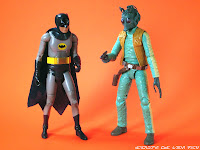 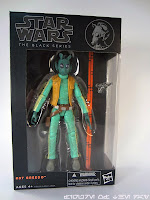 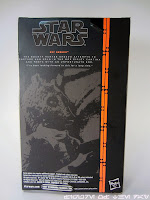 Collector's Notes: * - this is a nitpick. The only way I think we'll see a better set of eyes is if Hasbro somehow does inset clear plastic eyes in his head which is pretty unrealistic for 2013.   This is what I'm sure Figma or Revoltech would do if they get the license in the next decade or two.  I await the fan-made aftermarket heads and/or upsized Cantina booth seats via the Shapeways.

I haven't seen him in a store yet.  I got this figure online from Entertainment Earth, and so should you.  (The wave is $79.99 with free shipping, you cannot beat it.  If you wait to see it at Target you'll still have to pay sales tax, so just buy the wave of four.)  I appreciate how the wave is really built around Han - his girlfriend, and two people that want him dead.

So if you look closely to latest DVD version of Star Wars ANH CGI elements were added to Greedo, he looses his circle eyes and is given a more expressive face.
I am in the circle yeys Greedo camp myself but maybe this could be the reference material that Hasbro was using.
https://plus.google.com/photos/102542760950977079734/albums/5184276354908897233

The "new" DVD version you link to is a fan edit - not an official release. If it were legit, I'm fairly sure it would also be on Blu-Ray and widely and loudly reported by fan sites as yet another unnecessary round of changes from the house of Lucas. Also, Hasbro posted their reference shots for the Black Series figure on Entertainment Earth, so we got a good look at the behind-the-scenes images used for the creation of this figure already.