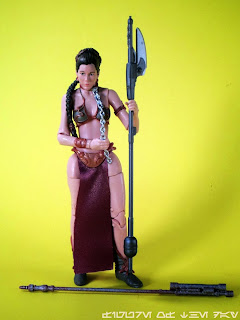 Bio: The notorious bounty hunter Boba Fett prepares to deliver the carbonite-frozen Han Solo to Jabba the Hutt.  (Taken from the figure's cardback.)

Commentary: Arguably the most influential outfit for the character, the slave outfit of Princess Leia was first to the 6-inch line for some reason - and I wish it wasn't.  It's not a terrible figure, the short release is just a hair over 5-inches tall which is pretty close in scale to Carrie Fisher's 5-foot 1-inch frame, relative to the other figures.  Hasbro and Kenner have taken license with sizing for years, so it's more than a little shocking when they get it right instead of fudging it for our benefit.   As far as I can tell, she's basically the right size, and the figure is somewhere in the field of adequate.  The face is good - not great - the face paint on my sample could have been a smidgen better, but you can see that the sculpt is on the decent side.  Getting joints into a mostly-unclothed human at this size is difficult, although I would argue Mara Jade's 3 3/4-inch release pulled the arms off slightly better, no doubt thanks to things like her gloves and the natural cut points at the shirt.  Leia has the unenviable task of trying to work shoulder joints in to an otherwise nice body, and Hasbro did a pretty good job given the challenge. 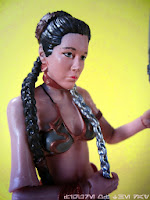 The cloth skirt is a bit of a dud.  It's hard to do well, so Hasbro didn't really try here - there's no draping, it's just a sheet of cloth glued to a metal bikini bottom.  It could be worse, and it could be better.  The rest of her outfit is largely good, but I find the chain accessory very lacking - it's a bendy, one-piece plastic choker.  The 2001 3 3/4-inch release has a real metal chain and a similar cloth piece, so in some respects this one isn't quite as good.  Also, this outfit is one place where I'd be more than willing to sacrifice articulation for aesthetics - the best Slave Leia bodies tend to be under-jointed, so swappable arms or swappable lower bodies with that classic sitting pose probably would have made for a better piece.   I guess what I'm saying is that overall, it feels rushed. 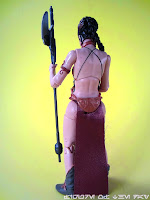 Leia's hair braid does not hang well.  It's sculpted nicely, but I have difficulty getting my sample to look good - I don't know if rooted hair at this scale would have been better, but I'm generally not happy with how it turned out.   I was pleased with the two accessories - one weapon is similar to that of Boushh, which is the costume I would have personally loved to have started with.  The other is similar to Skiff Lando/Weequay's signature axe, and Hasbro did a wonderful job sculpting and decorating both weapons.  If memory serves, a prop builder once told me the round end of the axe weapon was made of hacked-up two-liter soda bottle parts... or at least could be fabricated that way.

When it comes to figures, I often tell people who are jumpy for a character to be happy they waited - generally speaking, toymakers get better figures with time.  This version of Slave Leia combines some of the better elements of previous 3 3/4-inch figures with some of the more lacking elements.  Articulation is nice, but if I can't get her to sit right, what good is it?  The chain is acceptable, but for $20 couldn't I get a tiny chain?   I bet that this figure would have looked significantly better had it been put out two or three years from now, but as it is it's just adequate.  It's odd to me that this entire wave has at least one or two "flaws" on each figure which seem surprising given Hasbro's rich history with the brand and track record of generally getting colors and shapes right, but well, here we are.  Slave Leia is correct on paper, but the execution shows this to be a figure that was a smidgen undercooked - normally not an issue, but with a larger figure at a higher price point problems tend to be more visible and more worthy of complaint. 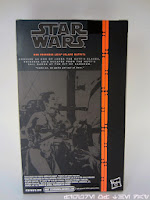 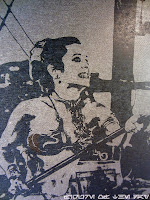 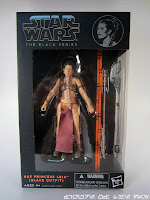 Collector's Notes: I saw this wave in stores for the first time over the weekend.  I got this figure online from Entertainment Earth, and so should you.  The face is better than one might expect, but I bet a customizer could take a paintbrush to her and give you something that would really impress you.  Hasbro did start out great, it just finished a little short of where I would prefer.

I'm sorry, but that's a horrid looking figure. The joints at the elbows look like she was crossbred with a Felucian Rancor rider. The hips make her worthy of a Sir Mix-a-lot video - that would be "Baby Got Back" for those who may not have been around in the early '90s. I was actually looking forward to this figure until I saw some of the early reviews on it. As it is, I'd rather buy the new Mara Jade who has a striking resemblance to Peggy Bundy.

I came within a hair of collecting this line but when I saw the advances of this particular figure, I just passed on the whole line. Yes, some of them have been okay but most of them seem off. I've gotten tired of the SW team intentionally grounding some figures because they want to reserve room to improve on them next time (and they do it far too consistently to believe they're not doing it on purpose). I've gotten much more into the masterpiece line of Transformers which, despite a couple of early missteps, seems to be finding its groove.

Monkey Leia, you have been dethroned.

To compare this to monkey Leia is ridiculous! Actually, I have all four of these in wave 2 and they all are really nice. To say that it would have been better to have a chain and maybe a little better accessories.........sure for $20 I'd agree 100% but monkey Leia she is not!!