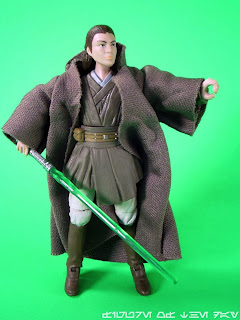 Commentary: These sets are quite ballsy on Hasbro's part, because nobody knows who Khaat Qiyn is.  In a year where the mainline is filled with remakes, re-remakes, and threemakes, it's great to see any outlet for a figure where we can all look and say "I don't have her, also, who is that?"   This figure suffers two indignities.  One, her left hand is actually the hand that should've gone to Que-Mars Redath, you'll note that it's much larger than her right.  Second, I think she's supposed to be of Asian descent.  The brown hair and peach skin make her look a little more like Leia, and Hasbro made no effort to match the intense make-up from her face.  The sculpt on the head is quite good, though, so I would anticipate a customizer could show us that Hasbro did do a great job with everything here minus deco and assembly.

Ms. Qiyn's body is recycled from Stass Allie, with her right hand originating in Tarados Gon.  Oops.  The lightsaber is green and according to the notes on Wookieepedia, this is correct.  Given the obscurity and lack of reference, I wouldn't fault anyone for having gotten it wrong.   Her unique cloth robe color seems to match the reference shots as well, so Hasbro gave us a figure that is on the low side of authentic but otherwise hits most major benchmarks.  Yes, we get 14 points of articulation.  Yes, we get decent deco.  But she may be the wrong race, and she's got a wrong hand.  It's sort of a spectacular failure, but in all honesty nobody would probably ever have noticed were it not for the likes of Wookieepedia in this era of every last character getting a backstory.  I wouldn't mind seeing Hasbro give her another shot with better head deco and the correct left hand down the road, for now she's fantastic diorama filler - but these bizarre errors are increasingly common in the line.  I can understand some glitches, but this one should have been plain to anyone doing approvals... I assume the hand was a last-minute error at the factory that sneaked its way into production.  I'd say get her as custom fodder or diorama filler as I assume you have no connection to the character.  If you told me this was Han and Leia's granddaughter, I'd believe you.  Why wouldn't I?

i just wanted to chime in to say thanks again for starting these up again. It's safe to say that i've read each one of these from day one and it's great to be able to add this back into my morning routine.