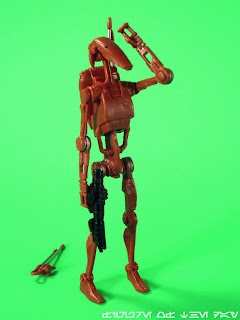 Bio: Battle Droids are manufactured in factories on Geonosis. They are built in endless numbers to create a vast army for the Trade Federation and the Separatists.   Carrying blasters, they pour into the Geonosis arena and onto the planet's bare, rocky ground to battle the Repblic's Clone Troopers in Star Wars: Attack of the Clones. (Taken from the figure's cardback.)

Commentary: So another Battle Droid was released, and it shows that by and large this wave was unoriginal and something of a tease.  I appreciate the emphasis on troopers, but none of these are areas I was looking to expand.  Based on the 2012 Vintage Collection Battle Droid (still warming pegs at some Targets near you), the figure is one of Hasbro's best takes on the robot.  It's super-skinny, can collapse completely into a little ball, and has both an antenna and a backpack so  you could easily customize one into a commander.  He's very unsure of his footing, so you'll want a doll stand - not a typical one-peg figure stand - to keep him standing over time.   Gravity and heat will cause him to collapse in a matter of time, be it days or weeks.   He will fall over, take my word on this.

He's easily the best red Battle Droid in terms of articulation and features, so it's sort of a shame to seem him stuck as part of an expensive online exclusive.  On the other hand, it's possible a collector with networking skills can trade a few of these guys away (or keep them)  while breaking up Droid Factory sets as each figure may appeal to a different segment of the collector public.  I was in no way excited to procure this figure, but I can't deny that it's a good figure and a smart use of Hasbro's repainting abilities, making it one of this set's highlights.  It brings something new to the table, but depending on your figure collecting needs it may not be sufficiently different.  There's a little silver "damage" and the eyes - and everything else - are where they should be.   Don't hold back on this one if you're interested.