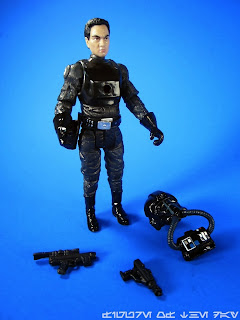 Bio: TIE fighter pilots protect the Death Star from a Rebel attack.  Black Squadron is stationed aboard the Death Star when the Rebels launch an assault upon the battle station.  Totally committed to the success of a mission, these elite pilots swarm into space to battle the Rebel fighters in a ferocious dogfight.  (Taken from the figure's cardback.)

Commentary: Just different enough to make you mad!   I didn't immediately realize what made the Black Squad TIE Pilot unique.  In addition to his gun, the helmet deco is where this figure is unique.  Some pilots have the "ace stripes" or "clown tears" painted gray on the mask, but this figure is notable in that it has one - and not two - Empire symbols on the helmet.  The right side is blank.  It's possible that this is Backstabber (DS-61-3), a pilot identified as such by a trading card.   The helmet pops off and it has the now arguably inaccurate Jango clone face under the removable helmet.

For those not in the know, this figure started off in 2004 as a "Saga" figure which has been upgraded over the years to include a second holster belt, a removable helmet, a new torso, and new arms with ball-jointed elbows and swivel wrists. The crotch and legs are basically unchanged, which is why the figure has no knees (knees weren't a normal thing in early 2004) and the figure has hips which rotate nicely and allow the figure to sit.   Sitting, of course, has been gradually engineered out of many of these figures over the years. 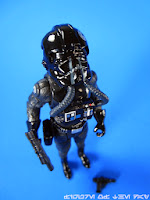 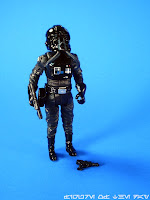 TIE Fighter Pilots with this construction have been pack-ins with vehicles and parts of gift sets over the years, and were also sold carded in 2010 - but the deco changes a little each time.  This is the only TIE Pilot figure that comes with the squarish barrel gun that was inspired by the original Kenner toy's weapon, and we last saw this particular blaster with Nien Nunb last year.  Overall you could probably cobble together a figure pretty close to this one out of toys you already own, but the one-logo helmet is what makes this one unique in your squadrons.  I should be dumping on this more, but I'm pretty sure I jotted this down in at least two possible exclusive proposals over the years so it's not like I wouldn't have done it.  Points to Hasbro for coming up with a different TIE Pilot, but at the same time it would be nice to see some ankles.  This basic body has been the basis for no fewer than six or seven figures by now.

Leave the helmet on! What a bad head sculpt

This figure has knees but no ankles.