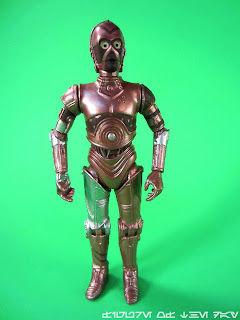 Commentary: When I heard Hasbro was axing its 2013 Droid Factory line, I was mostly OK with it - I was saddened to lose a few Astromechs, FA-4, and TC-70 though.  I have no use for another A-Wing Pilot, but I'll buy every last droid repaint Hasbro deems worthy to release.  I love these things.   TC-70 is based on Jabba's protocol droid from the 2008 The Clone Wars movie, and an animated version of the figure has already been produced.  The movie version seems like such an obscure nod to fans that I'm amazed it exists.

The body mold was used before to make K-3PO and U-3PO, each of which shared this figure's ability to be dismantled.  The head, arms, and legs pop off and can be swapped with other Droid Factory figures like various astromech droids, FA-4, and a couple of Death Star Droid figures.  Customizers have a lot to like here, but please, don't paint the TC-70 parts.  We need these.  This droid gets better deco than the mold has seen so far, with mismatched casing on the right thigh, numerous silver bits, a few stripes, and an expertly decorated head.  I don't think I'm being hyperbolic when I say this is one of the best - if not the best - paint job we've ever and probably will ever seen on a protocol droid action figure.

The animated-style figure has a few red paint marks that Hasbro ignored, and the metallic finish of the 2013 movie version makes it look like a more expensive release.  (Considering what it costs, this is appreciated.)  He has swivel wrists, shoulders, hips, and a head, with the elbows, knees, ankles, and waist having a greater range of movement.  The 2010 Vintage C-3PO has a slightly better range of movement and more moving parts, but this figure looks good and holds together nicely.  I greatly appreciate that Hasbro threw us a bone with at least one more "realistic" figure from the animated series that wasn't a main character, and if you're reading - I implore you - please give us a few more.  Sell 'em for $10 in the Black Series for all I care, I'll take your Astromechs all day long.  And so will these fine readers.  Won't you?  (Back me up, I'd do it for you.)

Collector's Notes: I got this figure online from Amazon, and so should you. It is sold with one piece in each of six other carded figures.   The packaging is unique for many reasons - not only is it based on the abandoned 2013 "Droid Factory" Legacy Collection concept, but the item is not six figures in a box - it's one figure with six items inside it.  The carded figures have no SKU and no UPC.  The P/N on the cardbacks are a Part Number, and that "part" that it represents is the actual cardboard piece - not the product itself.  As such this item was designed specifically to be an online exclusive, a retail store would likely never stock an item in the 21st century without a unique UPC unless it sold the entire 6-figure set, in its white mailer box, as a single unique item.

Here comes the back up. Yes Hasbro more droids! Bring em' in Black Series. I'd buy!

Darn it, Pawlus! You and the new $40 price tag at Amazon have reeled me in. Thanks for the review.