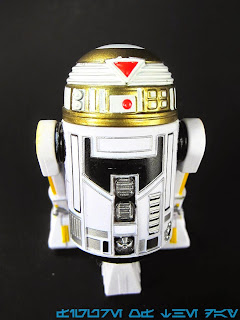 Commentary: And here we are again.   The mix-and-match nature of this line has resulted in some droids very specifically modeled after movie-specific robots, and others that don't seem to be based on anything.  The R7-Series Astromech Droid is back and has only one with a golden dome.  Interestingly, there's no specific matching R7 body for this one at press time - but there are new blue bodies as well as black-and-white bodies.   The dome seems a poor fit on most of the various body units, so I asked my mule pal Shannon to snag me the black-and-white body.  (I should note, it looks good on the R3-S6 body if not necessarily canonical in its configuration.)  The dome itself looks like a beer bottle of some sort, molded in gold plastic with white and red highlights.   It's a weird deco that looks like a bootleg, and that's how I likes it.  The manufacturer's decision to take a dull gold plastic and paint it gold makes it look amazing, although whenever you apply white paint to a dark color plastic it tends to look a little bloated.  As bloat goes, this one looks good - but it still looks like you expertly put White-Out on the thing.  As far as I can tell, the dome was not retooled. 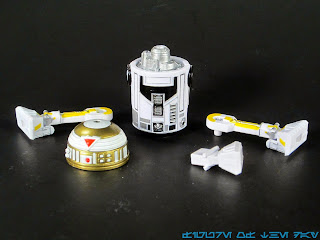 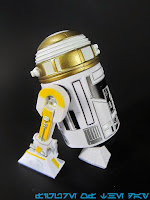 The body of this configuration was indeed retooled.  The lower holes on the body were removed, so you can't make a four-armed droid anymore.  The white plastic body has silver and black markings, most of which are painted well.  This sample is a little off on the rectangles on his left-hand side, but there's still a lot of silver to appreciate.    The back of the body is similarly decorated with a ton of black and silver paint - few of the other figures have quite this much deco.   It's not plain, I'll tell you that. 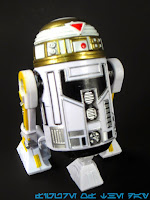 The central white foot for this (and all the other) colors is now unpainted, while the 2012 batch had silver markings around the bottom of the foot.  It's hard to see, so squint.

Overall this configuration is a damned mess - and I asked for it because it's what someone else sent.  After futzing with the parts in wave 2, I can't say this head really looks good on this body - it looks way better with the black and gold body.   Ah well.   I'd say if you're looking to cut back, skip this one - the previous versions were a lot nicer, and this is probably the weakest dome of the wave.   It's certainly unique, but it really does make you wish you  had a gold torso to go with it.  Were this released in wave 1 I'd probably give it more praise, but now that we're close to 40 of the theme park build-a-droids it's easier to say "weird enough to buy, but too weird for your dioramas."

Collector's Notes: I got this from my pal Shannon who was cool enough to get me a set from Disneyland.  This is the only R7 droid in the first 2015 assortment.